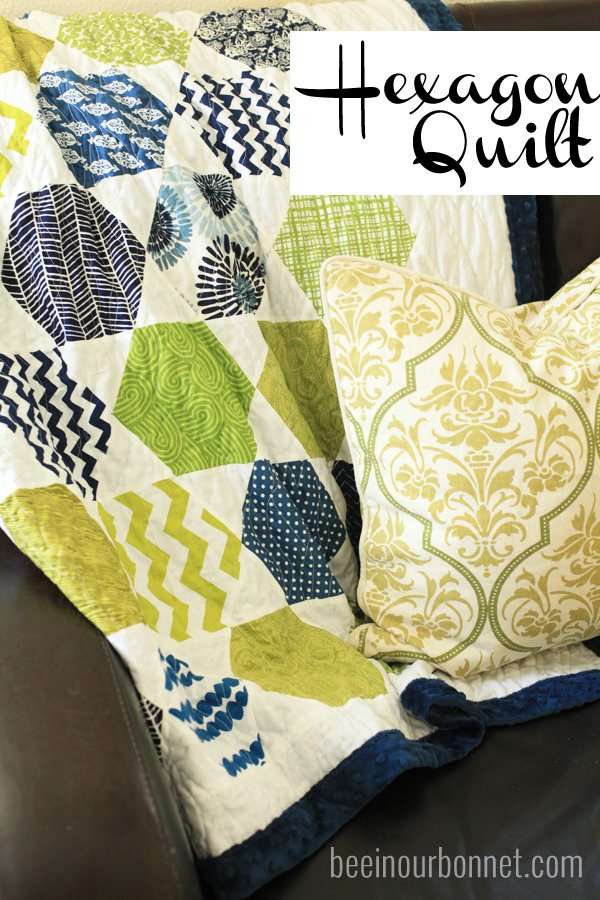 Okie Dokie.  I’m done moving now.  Did I mention I moved twice?  Ya, sometimes the timing of selling/buying your house doesn’t align perfectly.  So we had a short “layover” and moved again, but I’m feeling settled now.  The kids are all situated in school, the boxes are unpacked and I’m feelin’ good.  Also, there’s about a million home projects on my to-do list so the blog pace should pick up!  Thanks for being patient with me as I put my family and my move first this summer.

Anyway… This is a little project that I used as my packing procrastination.  I started it a couple weeks before I moved.  I had the fabric for a while and instead of packing it up, I set a goal to finish this one project before I left.  While I was working on it, I’d talk to friends on the phone and they’d say, “shouldn’t you be packing right now?”  I was like, “ya, but that’s not as fun as this.  I’ll get it done.”  I just had a bee in my bonnet to get my new snuggly couch quilt done.  You know, because summer was starting and I might be cold.  ??? 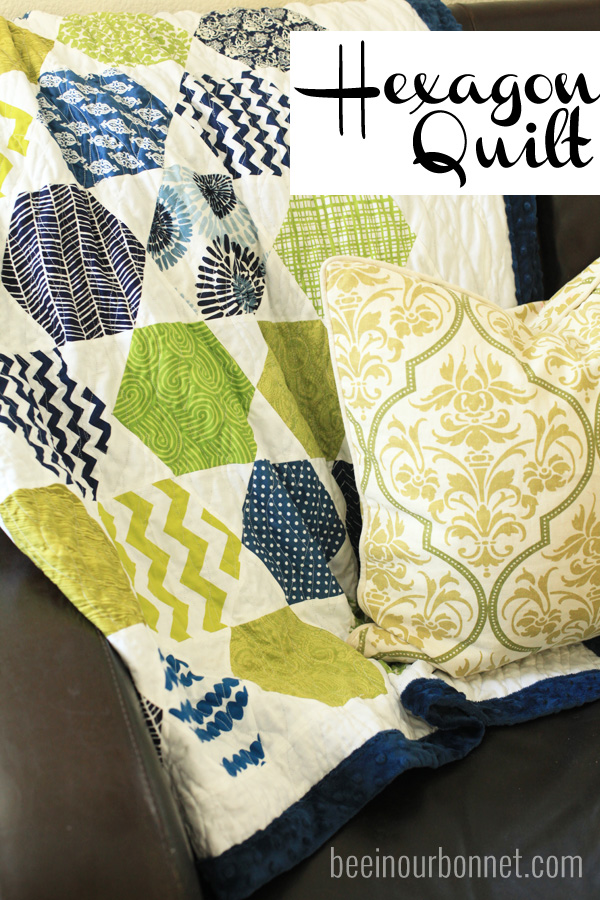 This was a purely selfish project.  I made it for meeeeeee!  Ever since I made a quilt with minky for my daughter, I have dreamed of one all to myself.  I often try to steal hers but she loves it as much as I do.  There is just something about a quilt with minky that makes it my ideal blanket.  It is thin (no batting in the middle, but heavier than normal quilts.  So the weight of it falls on your lap so nicely.  It’s so cozy, soft and somewhat warm because of the minky, but not crazy hot though.  I also love how the stretchiness of the minky makes the top fabric wrinkle up a bit more than usual.  This makes it seem extra homey to me.    It’s hard to describe unless you’ve snuggled one, but just trust me.  It’s cozy! 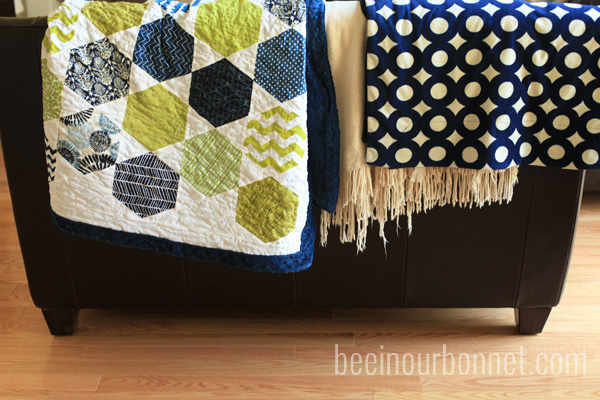 I picked out some wild, patterned fabric in the two colors I wanted to update my family room with, so it would semi-blend in with the decor.  I also had it in my head that I was going to conquer a hexagon quilt.  I had heard they were sort of more advanced, but I was ready to learn and conquer y-seams.  But when I laid it all out on the ground, mixing up my patterns, I didn’t love it as much as I thought I would.  I’m all for pattern, but this was hard on the eyes. 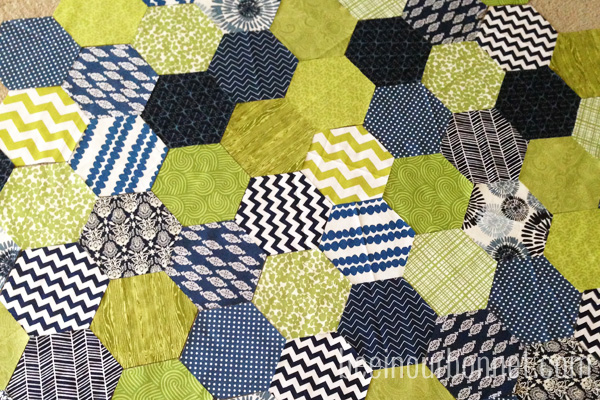 So I thought it needed to be broken up a little with some white space.  I looked for a new configuration for my hexagons and found this pattern from simplify.  It seemed that just a little bit of separation would look better and a bonus was that it was easier.  This pattern was easy for me and I would still consider myself a beginning quilter.  I had already cut my hexagons bigger than the pattern so I adjusted the triangles and border.  I also made more rows.  I wanted it to be about as big as a queen sized quilt.  I wanted it to be a perfect red box/snuggle the husband quilt so I was going to have to share!  Here is a picture of it draped over my couch.  This shows about half of it. 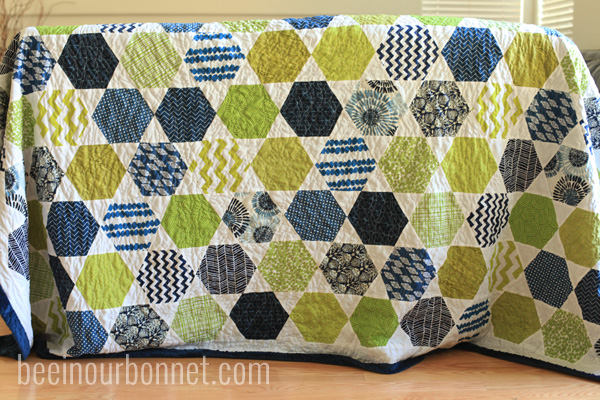 Then my mother-in-law came to the rescue!  She is a very talented quilter with a very fancy long arm quilting machine.  She stitched my top and minky together with this simple wave pattern I chose. 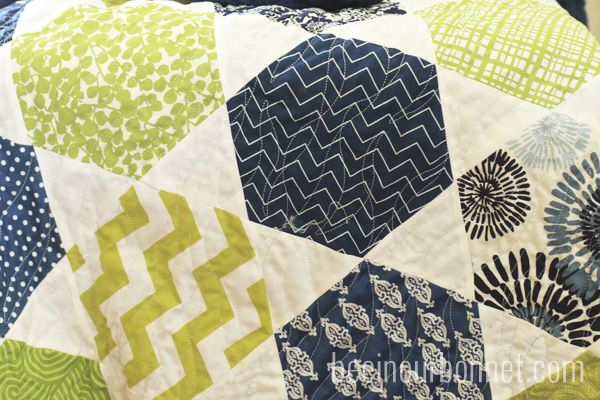 We decided to use white thread, but because the nap is deeper on the minky, you don’t see any white on the back.  You do see a bit of the design though. 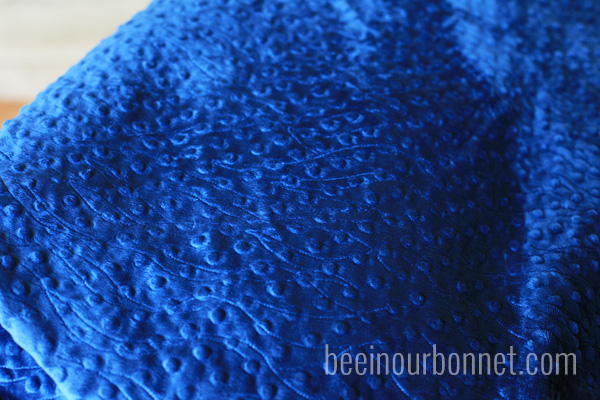 Then she made my day by offering to do the binding for me!  She suggested that just folding the minky over the other side and mitering the corners would look nice.  I love the way it turned out! 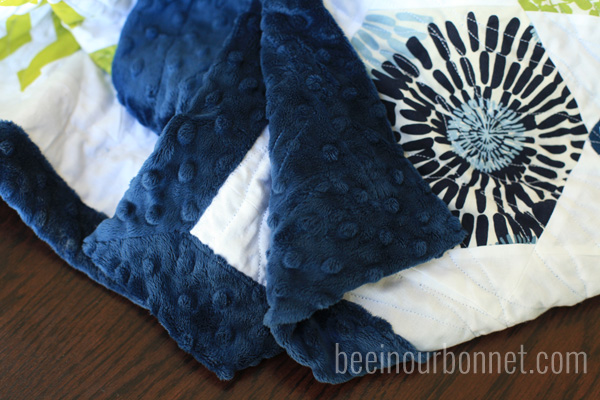 When my father-in-law came to help with the (second) move, he brought my quilt, all stitched up and finished!  How great is that?  She did the hard stuff for me!  My procrastination project was finished about the same time as the moving process was. 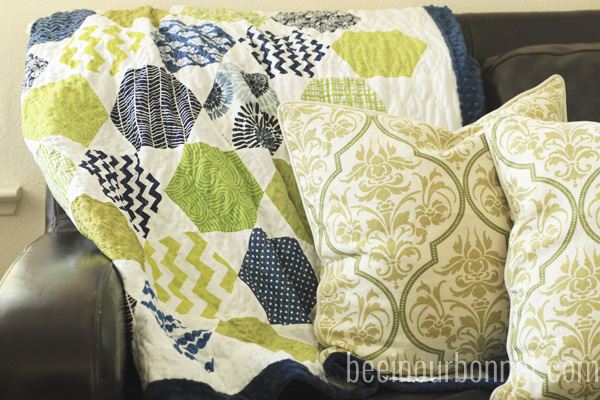 So now my couch quilt is ready for me!  Bring on fall and winter and grab a red box honey!