Here’s the thing about kid parties.

A lot of times, all the hard work that goes into them isn’t necessary.   It’s just us mom’s that do cute things for our own satisfaction, hoping it will make our own little darling happy too!

But in the end, we should always measure the success of the party on how much fun the birthday boy/girl had.  By that measuring stick, our pirate party was a success!

Yes, my little pirate declared it the “best day of his life.”  Mission Accomplished! 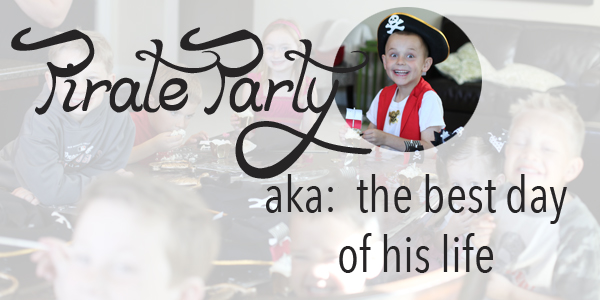 I was last minute and unprepared for this party in many ways.  (I’ll talk about that in a sec.)  However, with treats, I’m always on my game!  It’s my thing, ya know?  I just love it.  As soon as we have a party theme, I enjoy dreaming and brainstorming about what kind of treats there will be.  It just makes me happy!  I decided that some skull and cross bones were necessary. 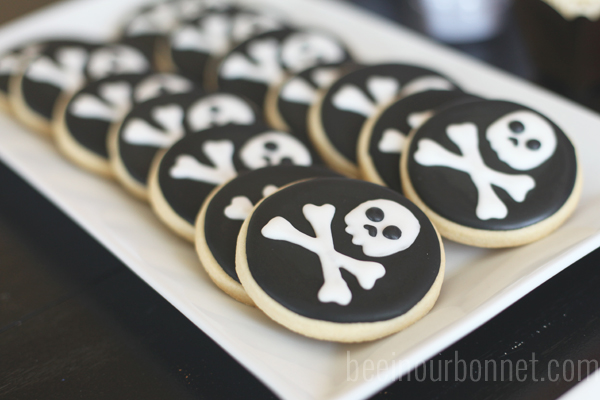 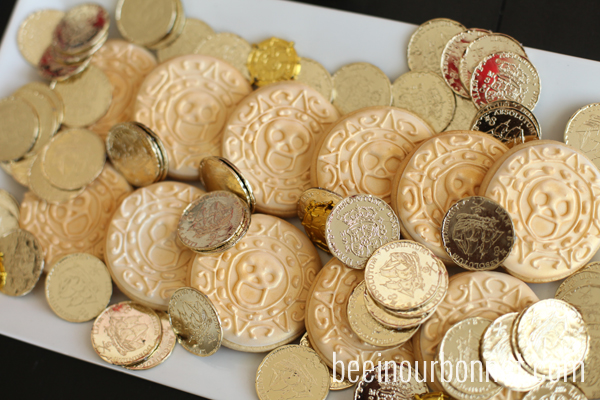 But my favorite was the cupcakes!  As soon as I saw these unique cupcake papers/holders at my cake store, I knew I should pay a dollar each for them and turn the cupcake into a pirate ship! 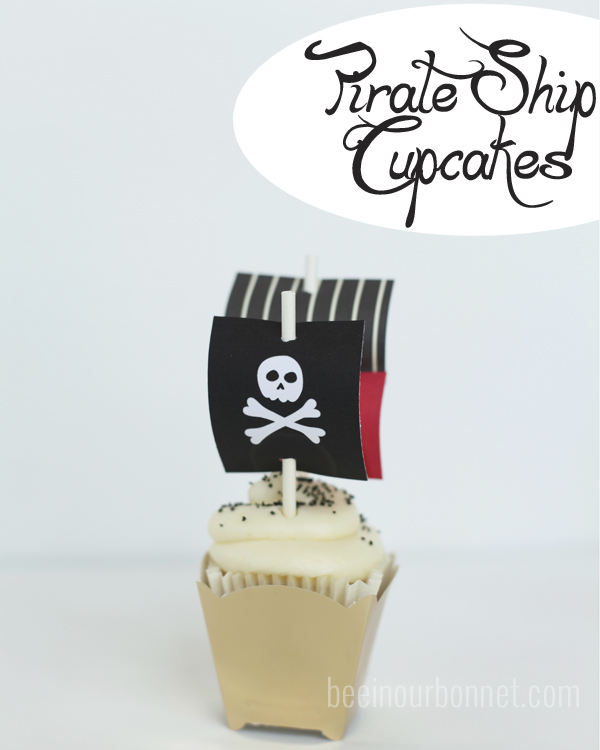 Sometimes you think you’re rad and you’re the first person to turn a cupcake into a pirate ship but then you google it and see 300 people did it before.  But that’s okay, yours is still cool.  Sorry for talking to myself, just doing my daily affirmations.  (hehe)  If you’d like to access the printable I made for the first flag, download it here.  The other flag is just paper I cut up.  Then I punched them out and put them on my cake pop sticks.

So now for the other, less prepared details.

The pirate hats didn’t fit.  I ordered them here from OTC.  I ordered a youth size, thinking these were only 5 and 6 year olds.  Well, I should’ve gone with the adult size.  They barely fit on heads, but I was so last minute, I didn’t have time to send them back and re-order.  We made do, but it was a bummer.

I also ordered the “message in a bottle” craft from OTC.  The kids drew treasure maps and we put them in the bottle with sand and a shell.  If I were more prepared, I would’ve labeled the bottles first because it was hard to keep track of whose was whose while sand was flying and bottles were shuffling. 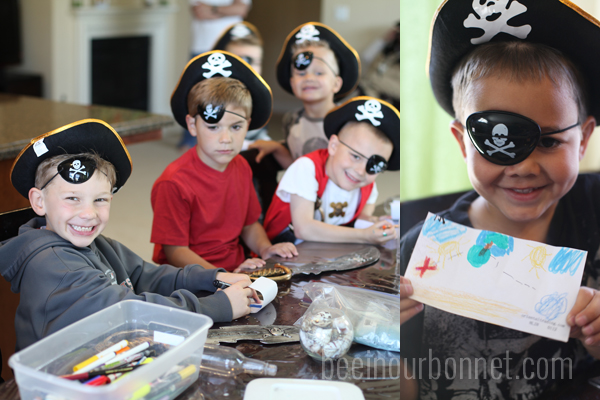 Next we played a game called “hunga bunga” which has a special place in my heart.  (We played this at our parties growing up and I’m pretty sure my mom made up the name.)  You start with butter knives, a wrapped candy bar and dice.  The object of the game is to eat as much candy as you can.  But you have to roll a “1” to start trying (and they must yell hunga bunga).  You can use one hand to stab, break and eat the candy.  Meanwhile, the dice are passed around the circle and as soon as someone else rolls a “1,”  it’s their turn to go at it.

I set it up saying, “pirates don’t have manners.”  They eat with their hands and knives and steal food.
It’s fun, but I had to do 5 safety speeches too.  The other hand should be behind the back.  Obviously that rule wasn’t obeyed very well.  Butter knives are dull, but could still be bad, so this game needs to be closely monitored.  And maybe a slightly older crowd would be less worrisome.  🙂 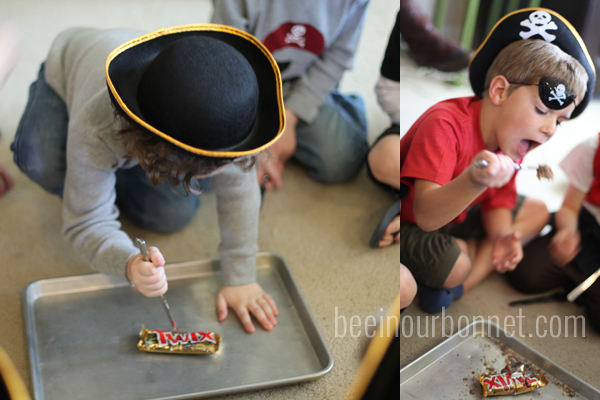 The next activity was “walking the plank.”  There was a little miscommunication with the builder/husband.  The plank was supposed to be 4″ wide, and difficult to walk on.  But he made it 10 inches wide, so we improvised and told them to do tricks (sidesteps, spins, etc.) on the plank without falling.  The husband was a great sport and dressed as Jack Sparrow, which was the complete hit of the party (kids didn’t recognize him), so I easily forgave the plank misunderstanding.

Part of my unpreparedness was not having something great for the birthday boy to wear.  We threw together some old Halloween costumes the morning of and called it good.  Anikin boot covers over flip flops work for a pirate, right? 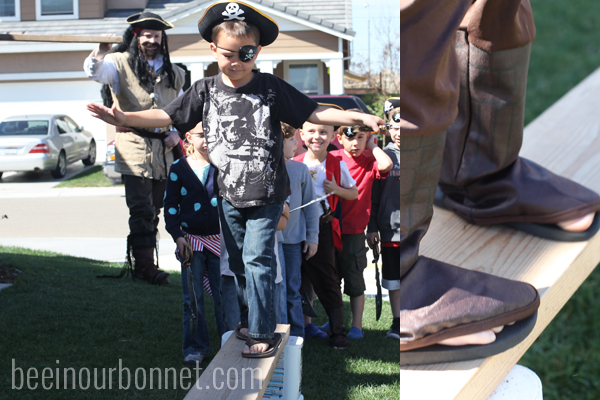 The treasure hunt definitely could’ve been better.  We went from house to house as a band of angry pirates checking to see if they had the treasure.  Minor detail was, that I forgot to warn my neighbors in advance (oops).  So they were all a little alarmed as they heard 10 hands intensely knocking at the door.  When they opened it, the kids demanded treasure and they didn’t know what to say (again, should’ve prepped).  We finally found the door of the neighbor I had prepped and he told them they had to find it in his backyard.  The treasure was a piñata, which led to the next activity.  Only, our piñata only lasted through a few kids before it was down for the count.  🙁

I made some simple “loot bags” by sewing some black fabric, then stamping it with fabric paint.  I made my own stamp the same way I did way back when in this post. 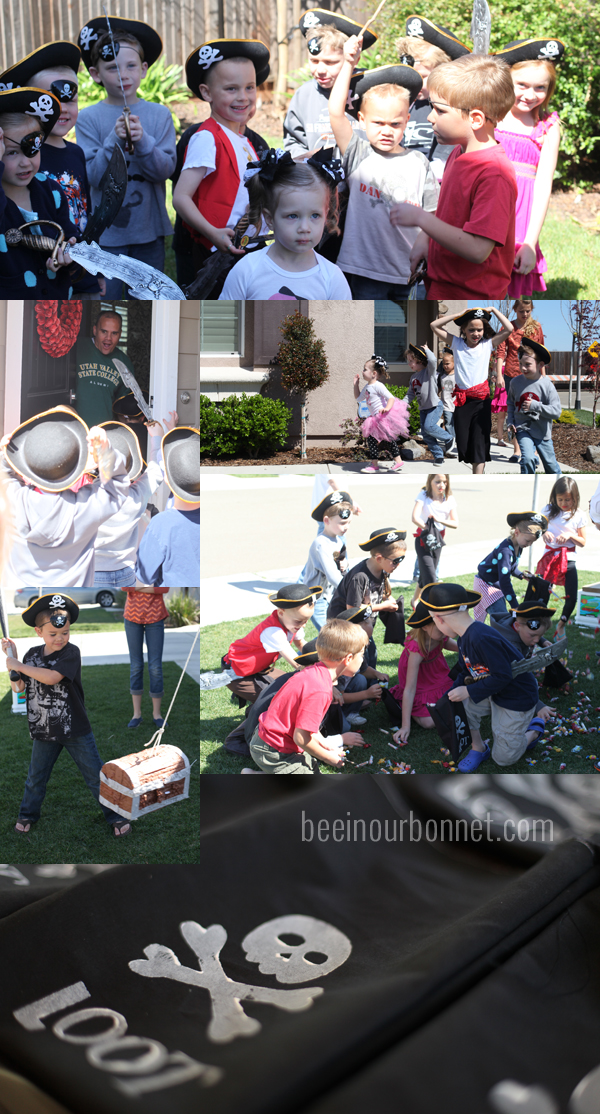 This little guy with the too-small hat and the smile sure loved running around the neighborhood with his friends.  He also loved that the whole family dressed up as pirates with him.  I’m not usually the dressing-up type (and I’m certainly not posting a picture of it), but for him, we’d do anything!  He also enjoyed licking the cannons candles.  It’s the small things that really matter.  I certainly have great memories of my parties as a kid.  I remembered hunga bunga didn’t I?! 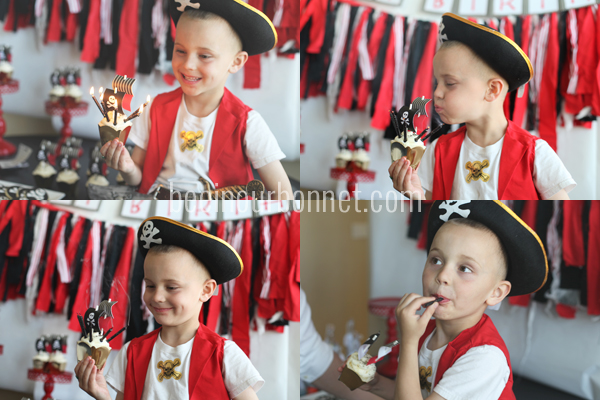 I tell you all of the good, bad and unprepared because it is proof, that even though this wasn’t the fanciest or best party, my pirate still declared it the best day of his life!

p.s. Recognize the fabric banner in the background?  It was my girls’ pirate skirts from 2 years ago that I cut apart.  Glad I saved those!