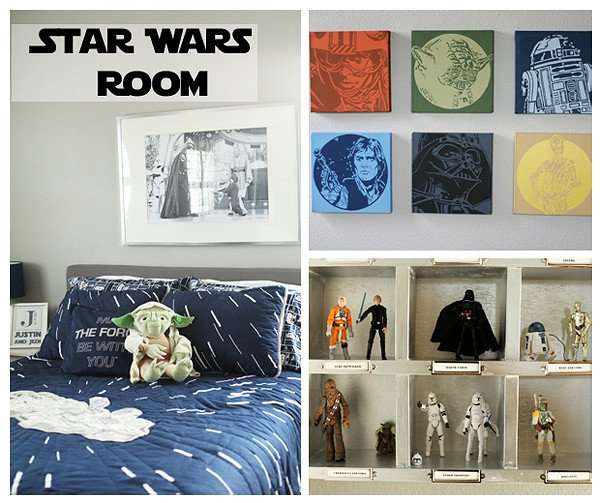 I am the mother of a Star Wars fan.

Are there support groups for this?
When my son became obsessed, I hadn’t seen the movies.  Much less was I able to answer his questions… Is that Padme or Queen Amidala?  Is Boba Fett or Jango Fett the dad?  How old is Yoda?

But I have come a long way.  As I read him “Star Wars ABC’s” on a daily basis, he was learning his letters as I learned the Star Wars characters.  Then we advanced to checking out “Star Wars Encyclopedias” from the library.

As my Star Wars intelligence developed, so did my son’s star wars themed bedroom. 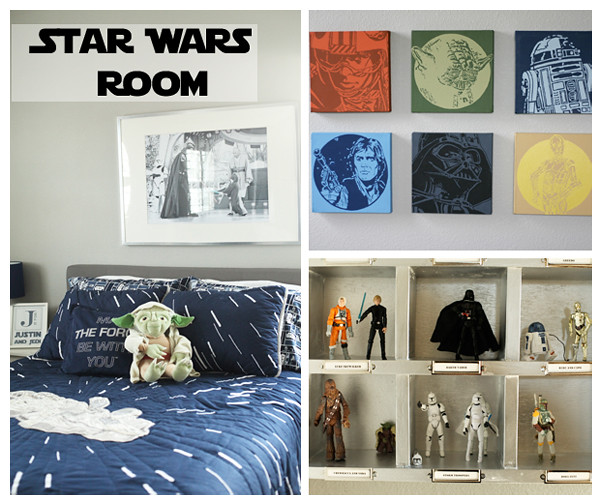 We picked this bedding from Pottery Barn Kids (purchased 2 years ago).  It is simple, yet has a big millennium falcon on it, so we were both pleased. 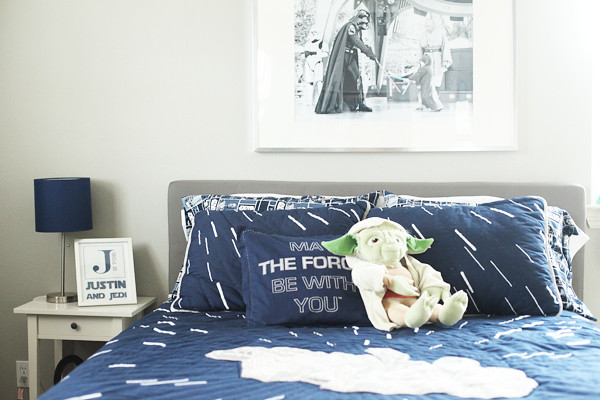 The main event on the wall is a framed picture of my son’s moment of glory, fighting Darth Vader at Disneyland.  Such a fun memory as my 3 year old son believed he was fighting THE Darth Vader and bravely persisted in battle.  I turned it to black and white (except the light sabers), put it in an inexpensive IKEA frame and hung it above the headboard.  (I got the gray, fabric headboard from World Market). 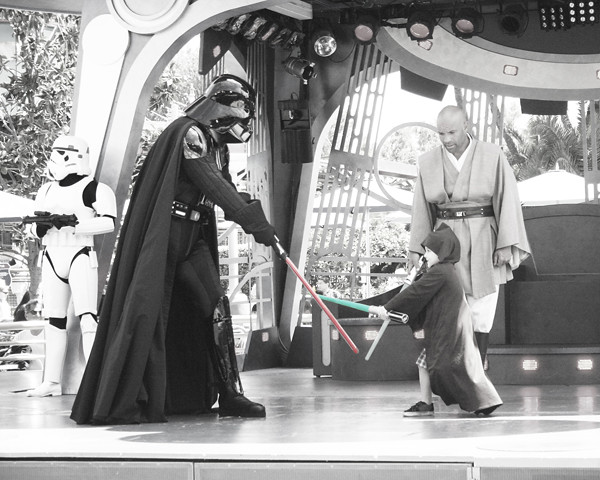 The white pillowcases are the ones he actually sleeps on.  I have a weird white sheet policy.  The shams are from Pottery Barn Kids and the other pillowcases, I made from this simple pattern. 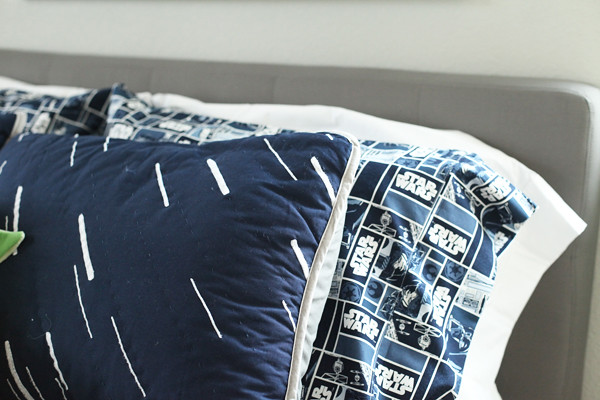 I found the fabric after I had already painted the “guys on the wall” and they seemed to match the graphic star wars images I had used for those paintings. 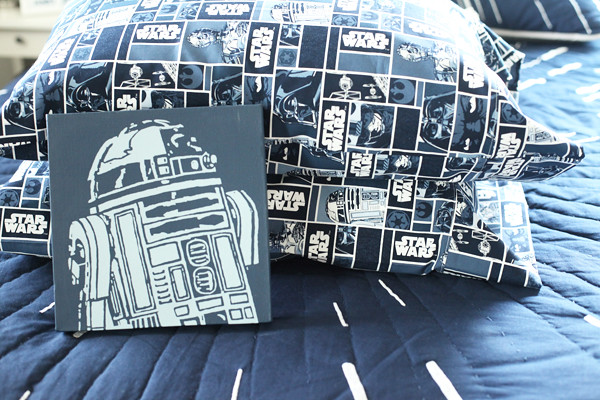 Then main decor in this room is simply his Star Wars toys, books and gadgets.  Yes, we have severely bought into the franchise.  I never imagined this would qualify as room decor, but my standards have lowered as I see it is what makes my little guy smile from ear to ear.

Another place I have lowered my standards is to let him have 7 light sabers, 7 swords and 4 nerf guns.  It is alarming when it is all in one place!  Whaaa?  Boys will be boys though.  Before I had one, I was self-righteous about how I wouldn’t allow play weapons.  But since I had one, I realize that if he didn’t have these toys, he would have a pile of sticks that he would use for the same purposes. 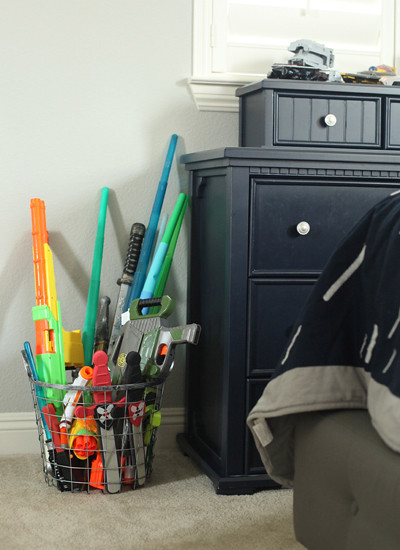 His prize collection of guys is displayed on these cubbies I made and posted about here.
They are displayed in the entry nook, ready to greet visitors.  They are constantly being rearranged and because of the labels, my son knows how to read some difficult words like Chewbacca and Mace Windu. 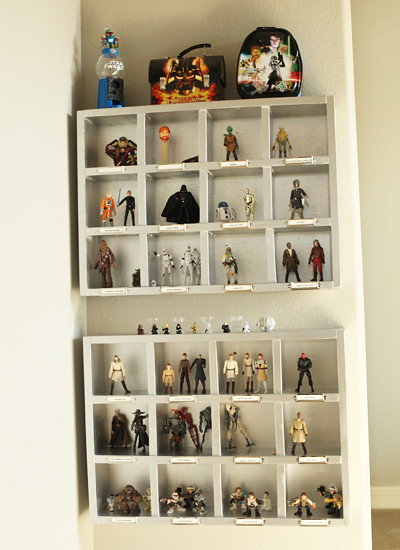 These paintings are lovingly referred to as “guys on my wall” and I posted about them here. 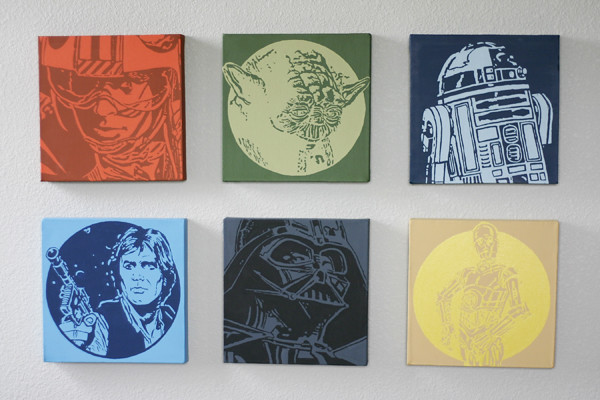 When I chose to do his room this way, I hoped it would last at least 5 or so years before I needed to redecorate in a big boy style.  But he is still choosing to bring yoda to pajama day at school and choosing a Star Wars backpack for Kindergarten, so we are going strong. 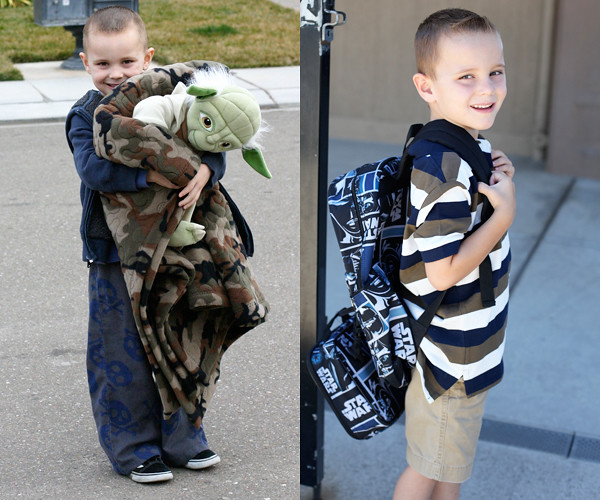 And he is on pins and needles until 2015 when the new Star Wars, episode 7 is released.

It’s going to be a long wait.
(I may really need that support group.)

But at least he can snuggle up in his Star Wars bed…
and dream of what Luke will do… and if he will use the force!