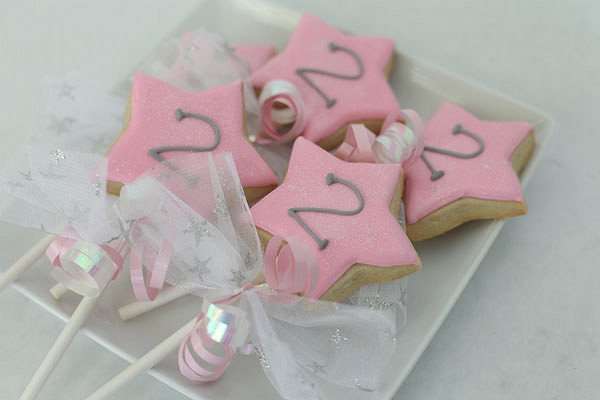 My kids are basically the luckiest.

They are so lucky that I have been lifetime friends with coolest party-thrower ever!
Which means they get to be friends with her kids.
And they have the privilege of going to her kids’ birthday parties.

And I am basically the luckiest.
Because I get to make treats for these epic parties!!!

Katie always has a vision, a color scheme, and a master plan so I love to sit down and brainstorm what the desserts will look like and how I can make them match that vision.

The princesses at the party got a cookie wand, covered in disco dust, tied with tulle and ribbon. 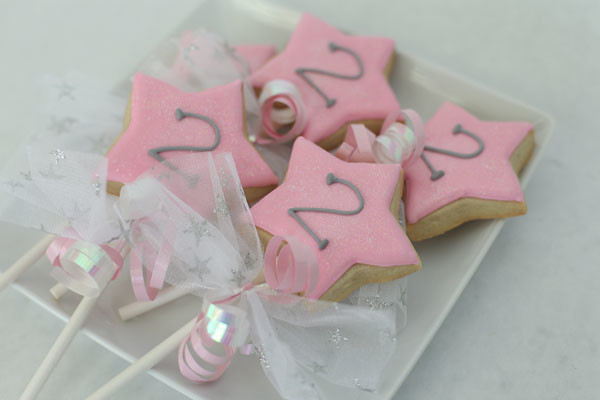 The knights at the party got a cookie shield.  The princess was turning 2, and the knight was turning 4. 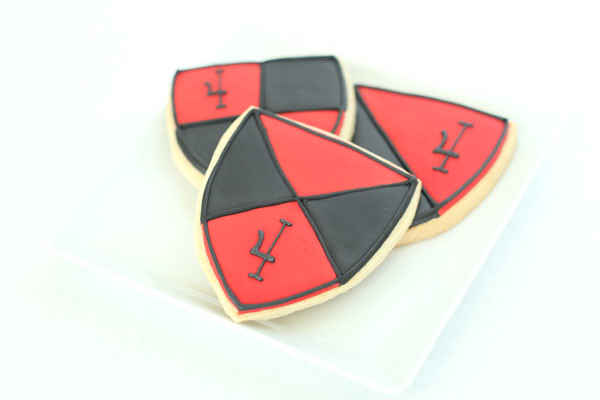 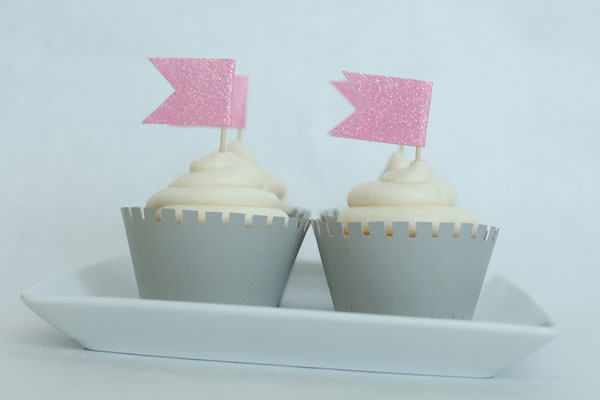 And the knights got a chocolate cupcake with a castle wrapper and flag.
Katie hand cut each cupcake wrapper and used a rectangle hole punch to notch the top border. 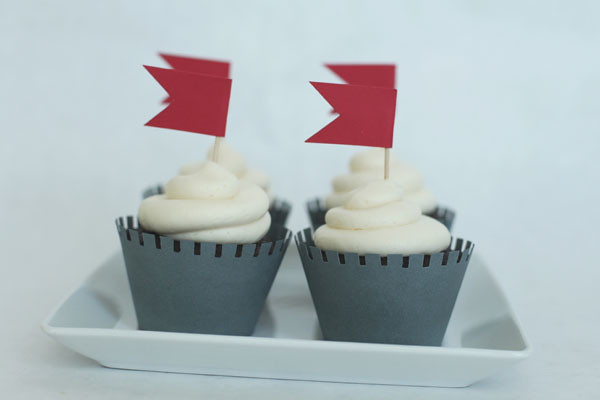 I know those stinkin cute cupcake wrappers are blowing your mind right now,  but you’re going have to find a way to wrap your mind around a ton more extreme cuteness/cleverness.  Because Katie has given me permission to share more party pictures and ideas here on the blog!

You already know about Katie’s talents from her Ladybug Party.  Well this time she chose a “princess and knight” theme for her two cuties with close birthdays.  I thought this was the perfect theme to combine a girlie party with a sword-lighting boy party!

First, I must introduce you to the princess and knight, who were dressed and ready to go! 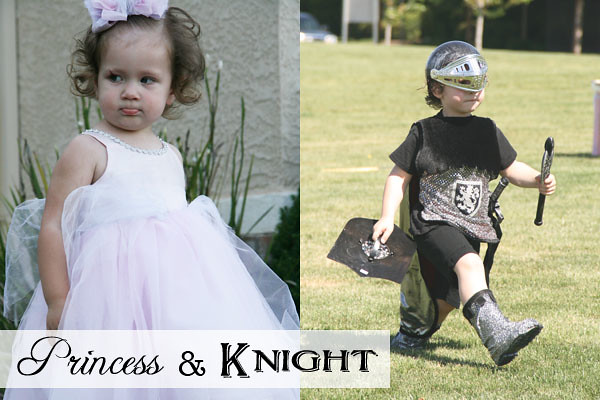 But every child at the party got to be in on it, so when they arrived, they came over to the wardrobe to get ready.  Katie is so awesome about including all of her friends’ kids.  From toddlers, to teenagers who get to be the helpers, she had all of her bases covered.  My son acted like it was Christmas morning when I told him he could keep sword and sheild! 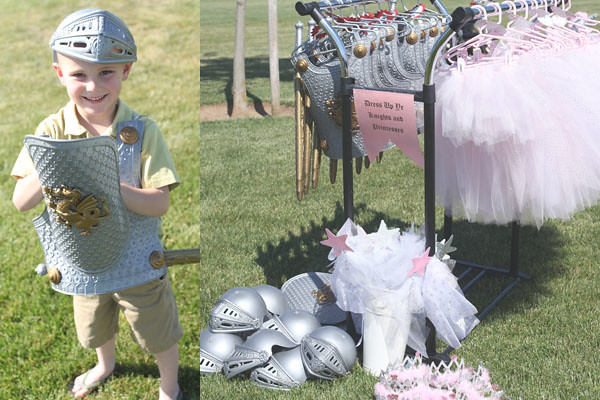 The shining star of the party was this huge castle Katie built for the kids to play in. 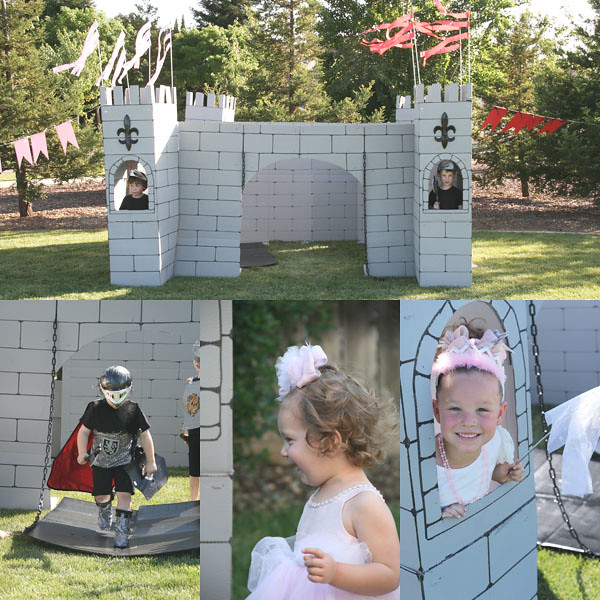 She admits that this was “one of those projects that seemed easier in her mind, than it actually was” (don’t I know about those) but in the end it was a huge hit for the kids.  She made the four towers out of large boxes and the side walls out of wardrobe boxes from Uhaul.  She used a whole 1.5 gallons of gray paint for this as throughly covered every surface, inside and out! Then she used a yard stick to guide her as she painted on the bricks.

All of these pictures were taken in really bright sunlight, as it was a scorcher that day.  Over 100 degrees!  But don’t worry because the water bottles made us smile through the heat.  She made these darling new labels with her cricut. 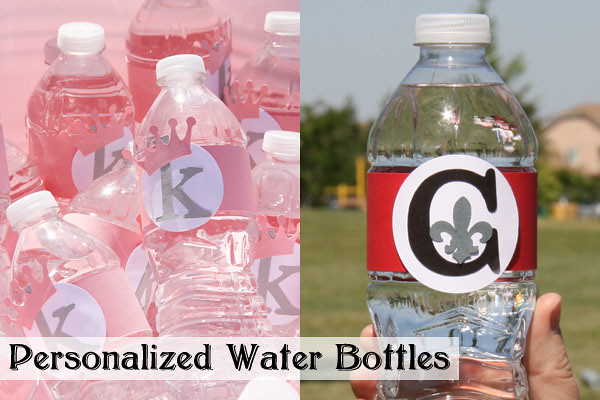 Then, the set-up.  Brace yourselves.

The princess table stayed true to the pink and silver theme with “jewels” and gorgeous serve ware.  I love the little place card holders she made out of little frames. 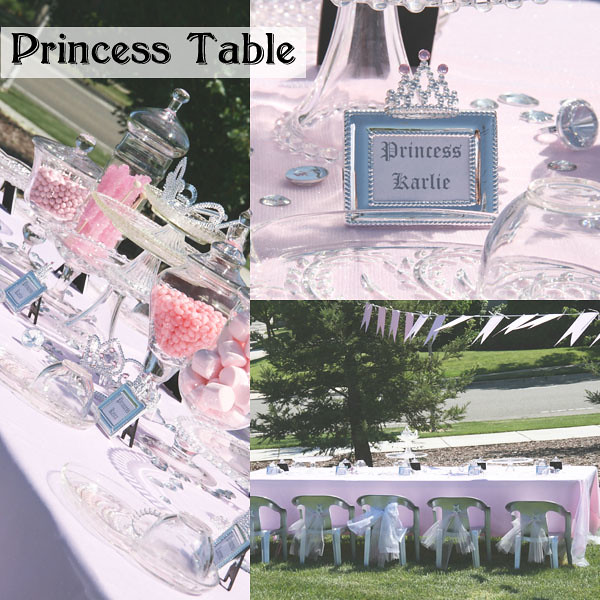 The knight table was black, red and silver with a full on knight right in the middle.  (She found the silver plates from the dollar store and the knight from a consignment store). 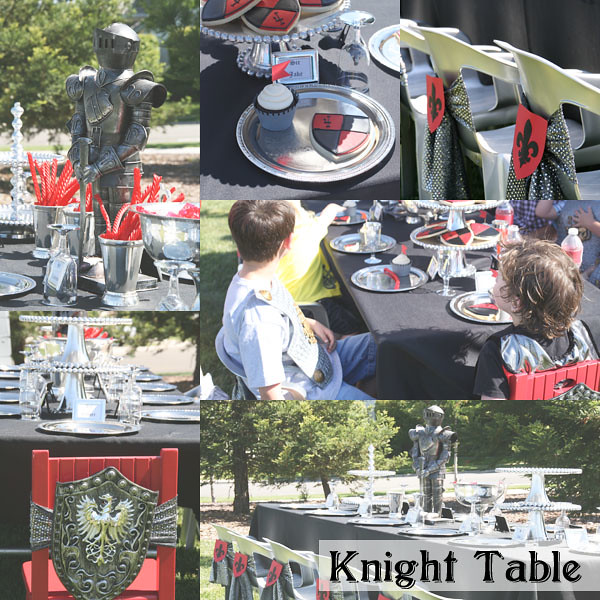 And there is nothing left undone.  She found these plastic kids’ chairs in bright primary colors and spray painted all 20 of them silver!  Then she tied them with embellishments!  (Wands from oriental trading and she made the shields). 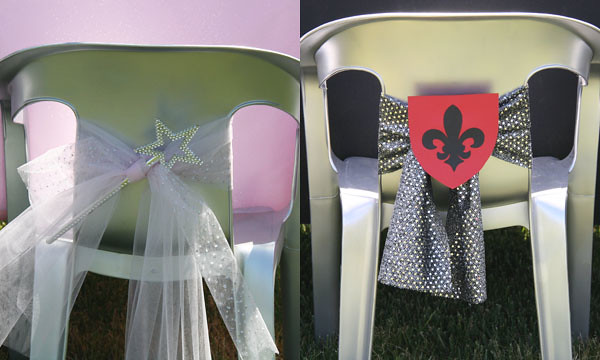 I know you’re dying.  But please stay alive while I tell about the activities and games she did!

I have no words for these though. 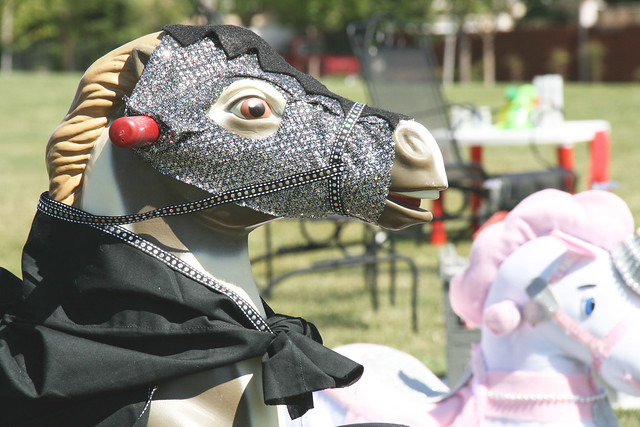 The fact that she turned 2 bouncy horses into this unicorn and medieval horse is just beyond creative.  She said she made it up as she went along with felt, hot glue, a pillowcase, some trim and a styrofoam cone!  I think she might be the girl MacGyver!

This game was like tag/flag football.  They had to chase each other to try to get their dragon tails and unicorn tails!  They were simply placed on with a clothespin. 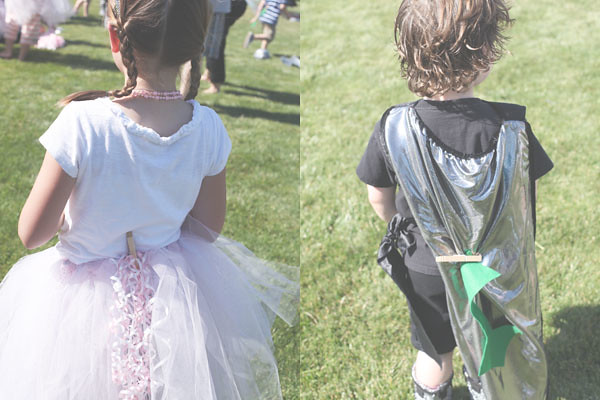 This is the station where they could build a castle out of paper rolls.  The adults helped with hot glue as they chose where to add and build.

Katie made javelins out of half a pool noodle (spray painted) and made a target out of an antique bird cage stand.  I’ll say it again.  MacGyver.

These sling shots and bows and arrows (dollar store) were made to slay the dragon.

There was also: building a castle relays, putting on the slipper relays, a princess make-up station, find the crowned jewels (by popping the balloons) and a guess the princess station and castles for the littles to play with.  Older kids were helpers and younger kids played with the toys instead of going in the relays.  Every child was entertained and happy to go home with their new dress-ups, treats, and castle project. 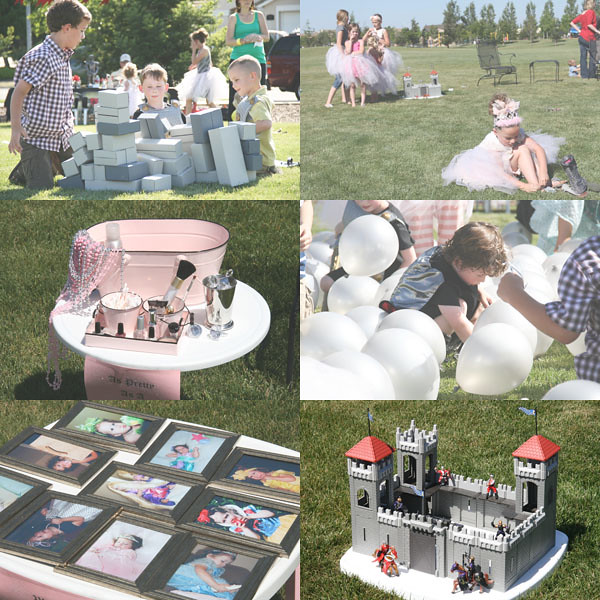 I am continually amazed at Katie’s ideas.  She is inspiring in anything she puts her creativity into.  I think that I get just as excited as my kids when we get an invitation from her address!

Thanks for being willing to share Katie.  Now the whole blogosphere is basically the luckiest!