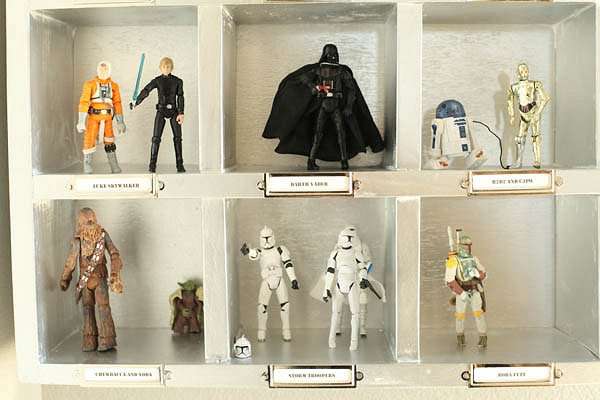 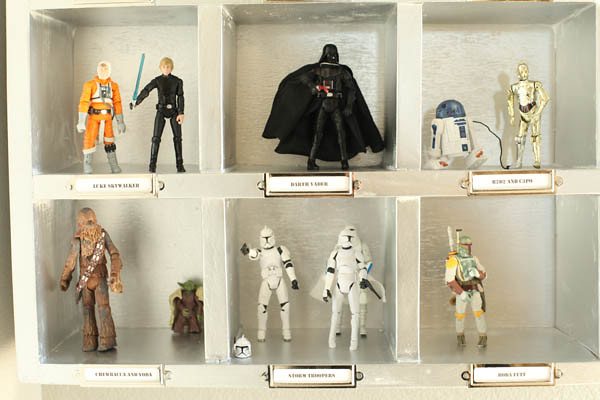 There is a little nook when you walk in his room and these shelves worked perfectly there.  And we really needed a place for all of his “guys.”  It’s all he’s asked for, for the past two birthdays, Christmases, Easters, and everything in between. 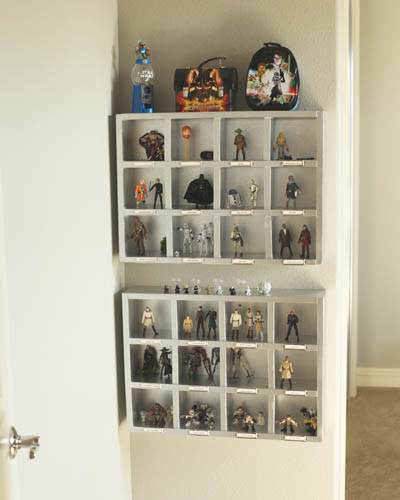 Do you recognize where they came from?
Remember my cubby shelves that I made as a Pottery Barn Knock Off?
(Click the link for full instructions on how to build it).
They first served as a “12 days of Christmas” gift shelf. 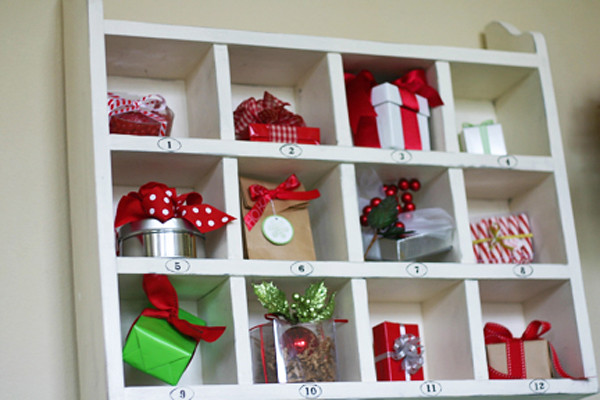 But after Christmas, I unloaded the shelf and set it on the floor upstairs until I decided where it would go.  My little guy would bring his guys to it and arrange them in the little cubbies.  I resisted for a while.  I wanted it to go in the bathroom.  But finally I realized it was the perfect little hobby shelf for him.  But the problem was that I didn’t think one would look right on that wall.  I knew two would fill up that wall in his room better.  Well, I did make two at the time…but I gave the other one as a gift to my sister.  I couldn’t ask for it back.  That’s so rude!  But, as soon as I told her the scenario, she offered the shelf back before I even got the the part where two would look better!

Kathryn agreed the shelf was called for a higher purpose.
To be home to the force….
(what a great sister, right?) 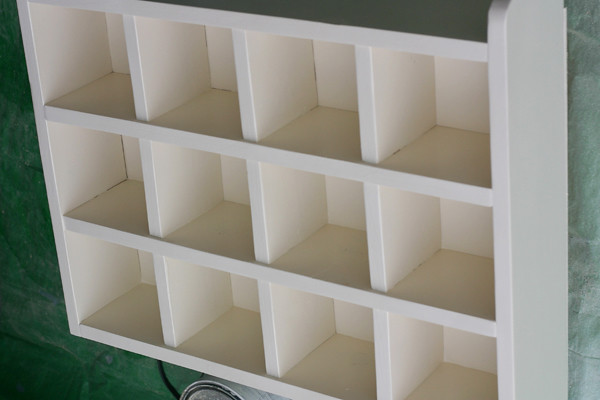 So I cut off the tops of the shelf because I thought it would look more like metal without the rounded edges,  and I spray-painted it with rustoleum metalic paint.  Then I added these label holders.  I got them at JoAnn’s in the scrapbook section.  But instead of adhering them with brads into paper, I used nails.  They come in a multi pack and only four of the narrow ones worked, so I got several packs. 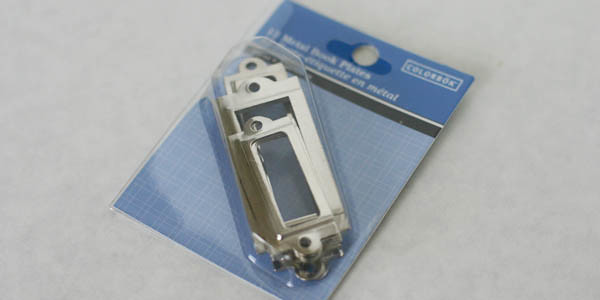 I had told my son I was painting the shelves for his guys and he couldn’t wait for the paint to dry.  I hadn’t told him about the label holders though, and I put them on while he was in bed.

He found his shelf in the morning and played…
He woke me up…yes he wakes up before me :/… and said, “MOM!  I know why you put those things on my shelf!!! Come here, I’ll show you!”

So I went downstairs and saw this: 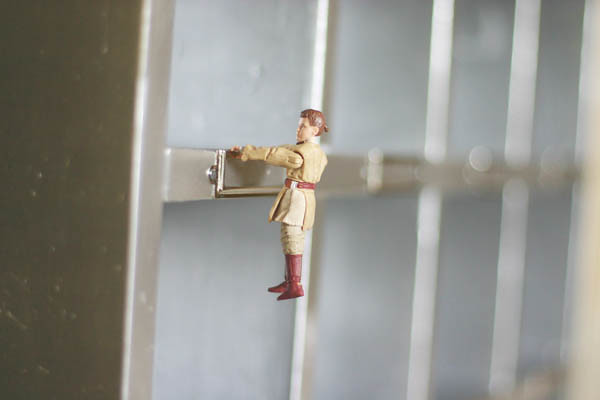 I told him he was so right.  😉  And also, it was so we could write the names of the guys and remember where to put them.  This led to the decision making process on how to organize them.  By movie?  By name?  By good guys and bad guys?  He changed his mind a lot.  But he decided on this arrangement. 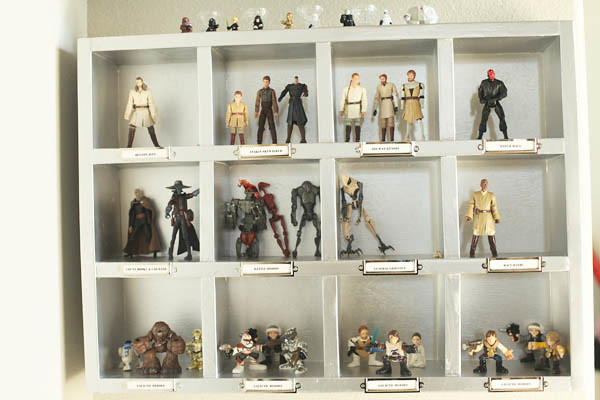 We can easily change the papers in the label holders though, as things get rearranged, or if he gets more guys {cringe-it’s all he wants} and has to group them differently. 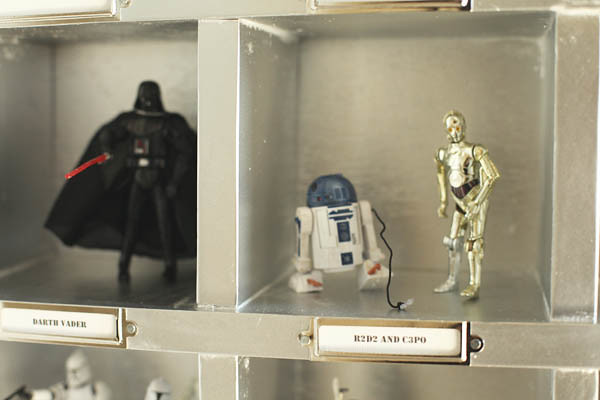 For now, the little guys are together on the bottom, the squinkies and fighter pods are on the top.
These things are important to him. 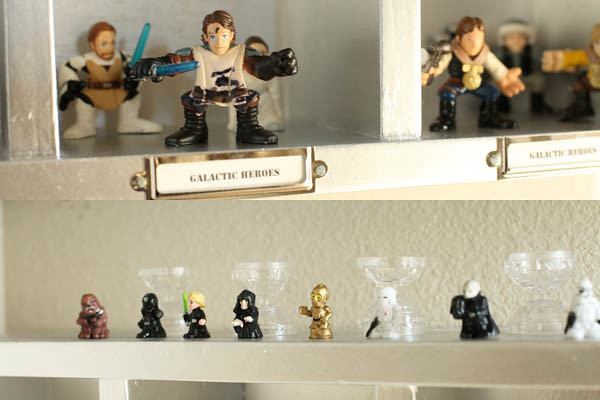 And let me tell you, these are not on the shelf just to be displayed.  They are PLAYED WITH!  As evidenced by Anakin’s missing head and Obi-Wan’s missing hands.  He can reach all but the very top shelf and gets a stool to reach it. 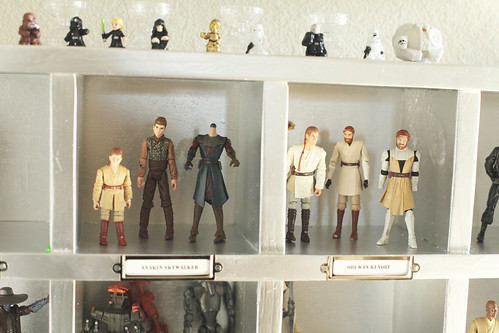 I still find these things all over the house, but at least they have a home for the days moments when things are clean.  Haha!

Although I miss my little decorative shelves, I’m so glad they are being used so well!  There is a 5 year old boy who is really happy I built these for “crafting with the stars” a couple of years ago!