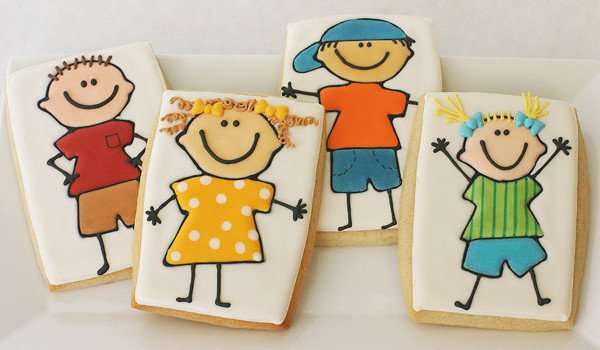 My most recent cookie project was making these cute little kids! 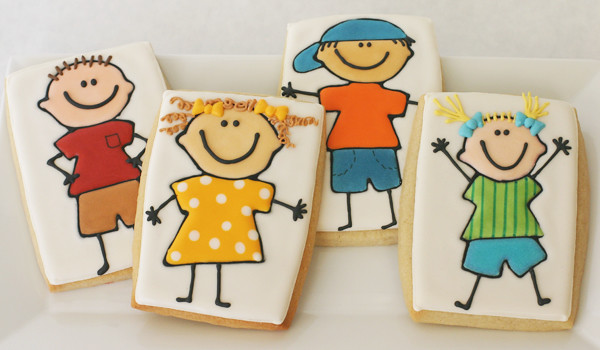 I struggled with the idea of making realistic looking kid cookies.  I knew it would backfire on me because I’m not an artist.  But I knew I could pull off some simple stick figure kids.
Now, when I say simple, I mean they only contain like 20ish icing colors and consistencies.
Yes, they were a little more intense than I thought when I chose some simple clip art off this site.

Here’s how these kids were made:  haha 😉
Let me start by saying that I prefer to eat a cookie that has a single layer of royal icing.  Some detailed dimension is fine, but if I were to have done a whole white layer, then the kid on top, then a large portion of the cookie would have had 2 layers of icing, making it a bit crunchier to eat.  So I went to the extra effort of filling in the white after I frosted the kids!
1. I piped the black outline (except the arms and legs) using my kopykake projector and a #2 tip.  I waited almost 24 hours for that to dry, so I wouldn’t get color bleeding.
2.  I filled in the shorts, shirts.  For the polka dot dress, I used the wet on wet technique.
3.  I filled in the faces with different flesh tones made from ivory and copper (flesh tone) americolor gel paste.
4.  I made a white border with piping consistency royal icing.
5.  I filled in the background with flood icing.  I let that dry for several hours.
6.  Next I added the hair and piped the arms and legs in black.
7.  I added hair bows.
8.  I drew the pockets on the boys with black edible ink.
9.  I drew the stripes on the girl’s shirt with edible ink.
I know you’re not supposed to choose a favorite kid, but since they are cookies…
I just love this little curly haired darling.  A #1 tip did the trick for making those locks! 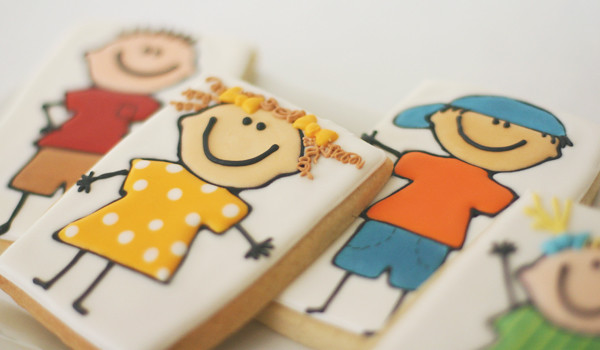 I hope the other kids will be able to get over the emotional scars.  I’ll refrain from ranking the others, because no one wants to be the last favorite kid cookie.  Hahahehehoho!