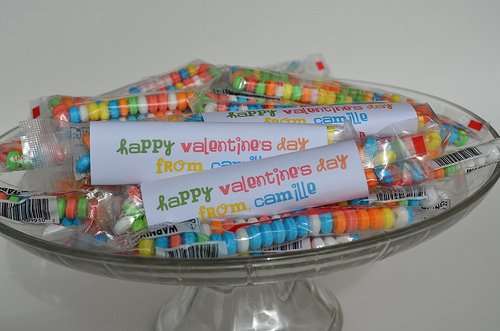 The last time I was grocery shopping I passed by the bulk-food bins and decide to multi task and buy some Valentines! I didn’t have a plan, but I’m a make-it-work kinda gal so I buy first, plan later.

First I saw these candy necklaces. I knew my 6 and 8 year old girls would think these were the bomb dot com! They are already wrapped and they were 15 cents each! You can’t even get a store bought My Little Pony Valentine for 15 cents. Score!

Then I tried to think of a clever little saying to go with it and every combination of sweet, neck, around, love sounded creepy, so I went with a classic, “Happy Valentine’s Day. First graders don’t read clever sayings anyway, right? 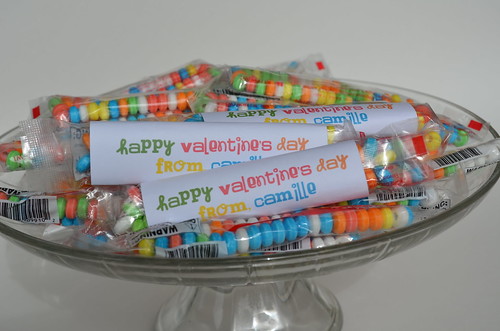 Then I happened upon a bin of fairly giant jawbreakers. Individually wrapped. They were more like 90 cents. But, they’re so cool. And when you are a fifth grade boy, you’ve got to be cool. And, he’s my middle child…and we moved to a new school this year…and I may have some guilt issues…and I’ll stop now. Let’s just say, I bought the jawbreakers. Here is the front and back of the tag. 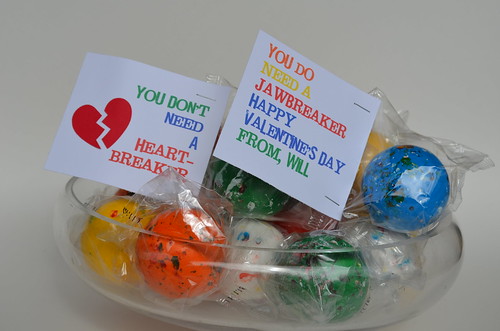 I bought a huge bag of Hot Tamales to see if my teenagers wanted to give out candy. My fourteen year old boy took me up on it. Surprising…Maybe he figures until he hits his growth spurt he can impress the ladies with candy. He he.

Once again, I had a little trouble coming up with a cool and clever tag. Hope you have a “Hot” Valentine’s Day..I think you’re “hot”….Have a “fiery” Valentine’s Day. These might land him in the principals office. So I played on the fact that his favorite color is red and he thinks it’s sweet that his name has the word red in it. And, he’s easy to please. 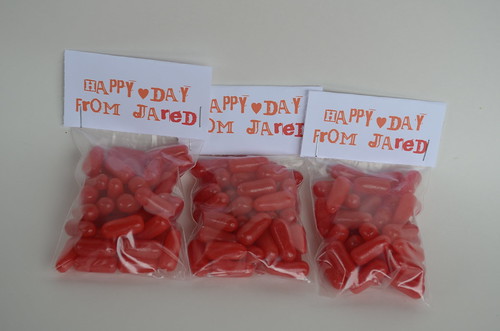 The moral of the story is…stop and browse that bulk-food section. You never know what Valentine treasures you’ll find.