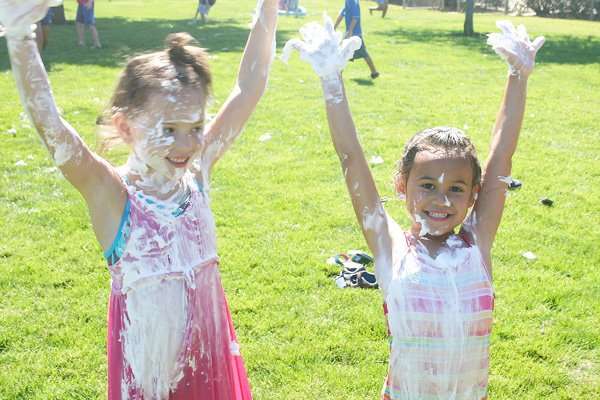 Its a rare occasion when I let my kids get really messy.

Tell me I’m not the only parent who says NO to moon sand, play-dough, or finger painting,
just because I’m feeling too tired to clean up after the activity?

But all of my kids’ hopes and dreams were fulfilled when they attended the Messy Party at church.
My genius friend planned this activity last summer and it was a huge hit!
I found myself in charge of the activities for the kids at church this year, and decided to do it again.
I was totally so worthy of a sequel!

After 2 successful Messy Parties, I decided it needed to be shared with the world!
We were planning for a group of 40-55 kids at church, but it could be for any size group of kids.
It would be fun for a birthday party, block party, or if you’re really ambitious, a play date at your house!

I repeated a few things from last year, and added some new activities too.
I’ll just share highlights from both parties as a big list for ya! (I only have pictures of some of them).

Shaving Cream Slip and Slide- Its hard to say, but this might have been the favorite.

We did it both times. Some were covered head to toe! They would just go wash off and then slide again. 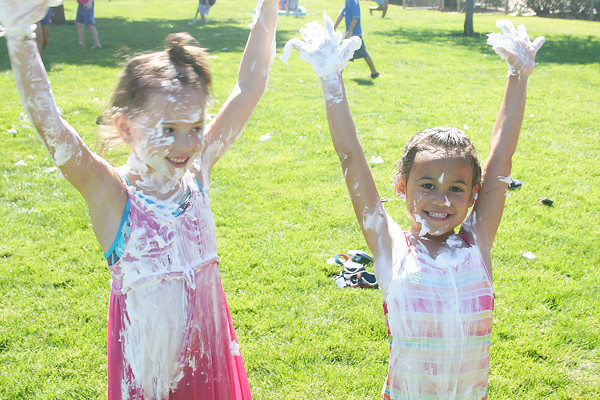 Messy Hair Station– The first year we had a messy hair station.

We got a bunch of cheap hair clips and combs at the $1 store and tried to make their hair messy fabulous!
Some even wanted the colored hairspray. (It washes out).
This year we just announced that they should come with a messy hair-do. 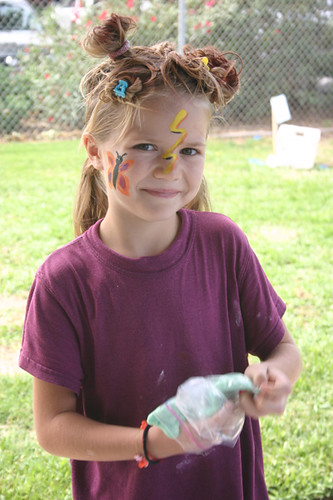 Water Balloon Fight- There were hundreds of water balloons!

They played boys against girls in a big open field! This was the anticipated big event last year. They had earned the amount of water balloons they got and enjoyed each one. 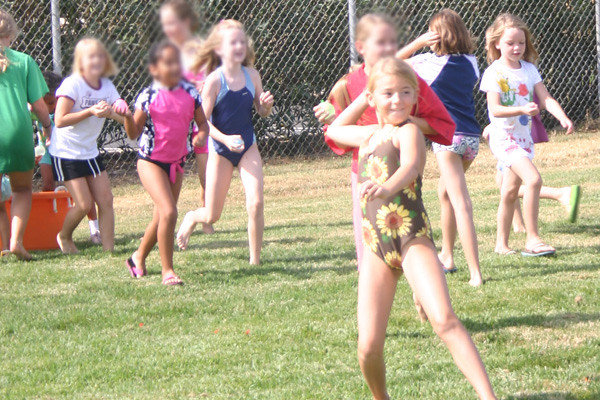 Water Wars- A simple kiddie pool with water guns and missiles kept so many of them entertained for a long time! 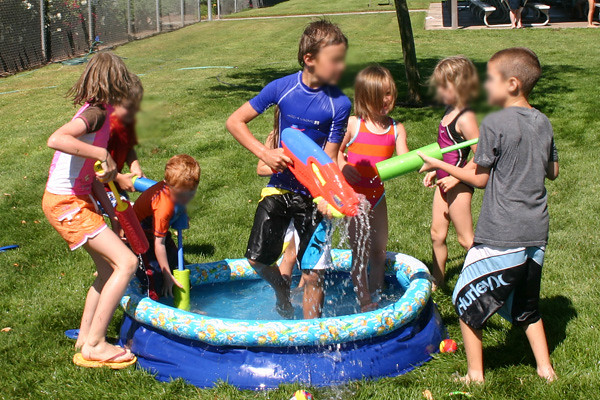 Pudding Eating Contest- No hands was the only rule! 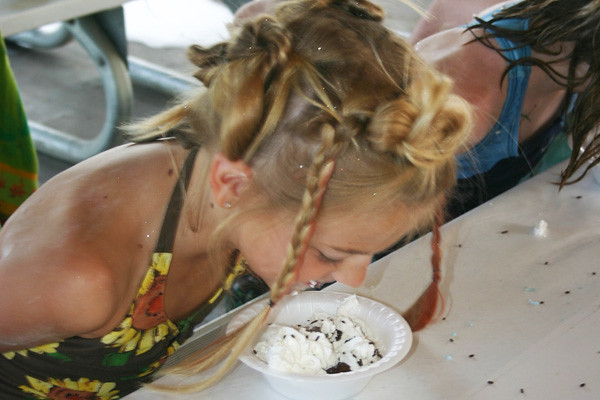 Making Gak!- I don’t have the exact recipe my friend used, but she had pre-portioned amounts

of one ingredient in a sandwich bag, then scooped the other ingredients in. They zipped the bag,
mushed it around and had themselves a bag of gak to take home. My kids played with this for months after!

Ooblec Play– Do you remember ooblec from science class in junior high?
When you mix 2 parts corn starch with one part water, you get an ooey-gooey mess.
It can be rolled in a ball as a solid, then suddenly melts right in your hand back to a liquid.
We had rainbows of this on a table for them to play with as they please.
Some kids never left this table! 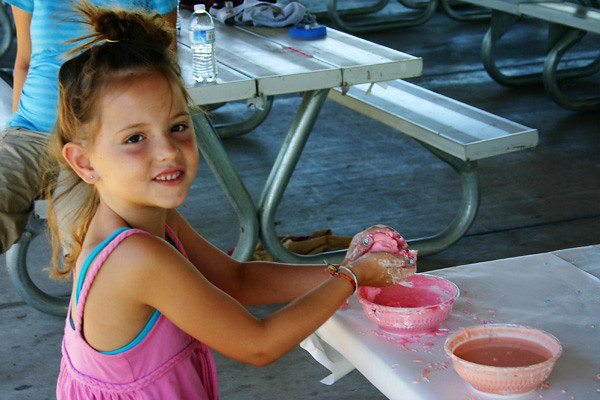 Flour Tag- What do you get when you fill a sock with flour and tag your friend with it?

A big puff of flour dust! When they are a little bit wet, it sticks! This one was a hit with the boys.

Spaghetti Tag- This is the closest thing to a food fight, many of them could get!

We had buckets of spaghetti (with plenty of water so the noodles would separate)
and a marked off area for tag! It’s hard to throw, but the goal was to get it to stick on someone. 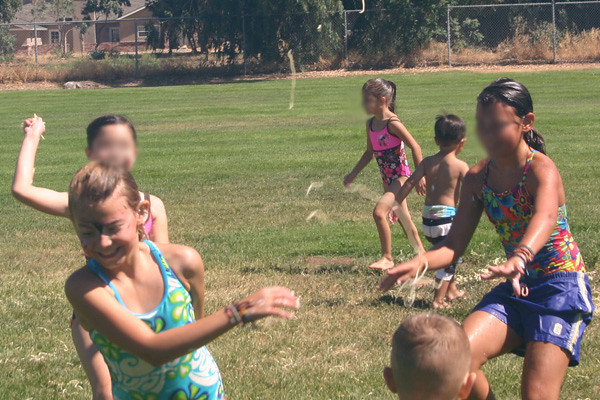 Silly String Simon Says- We played simon says, but when they messed up,

they didn’t get out, they got sprayed with a little bit of silly string.

Pie Throwing Contest– This was the big event this year! With just whip cream in the tin,

they each got to toss one at their church leader, who is a very good sport! 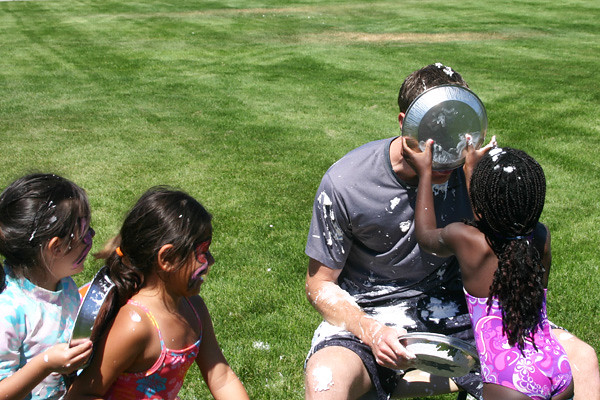 Egg Toss- Everyone chose a partner and we tossed, stepped back, then repeated.

Some got messy, but most of the eggs just bounced on the grass. Who knew?

Jello Tug-of-War– The tarp down below had jello and corn syrup on it!

If they got pulled into it, it was a sticky situation. Some kids just rolled around in it on purpose. 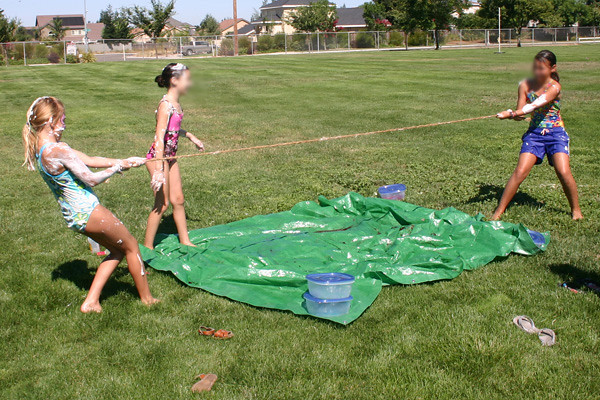 and thrown at someone. The game was to see how many they could get to stick! 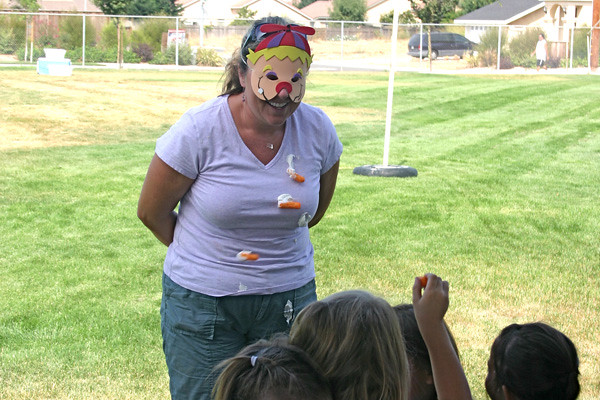 Jello Mural- We hung a large piece of fabric on the fence for them to get messy.

They used jello-water in spray bottles to make this abstract masterpiece. 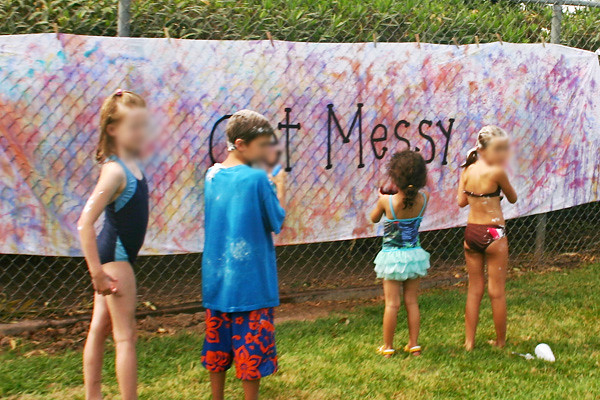 Face Painting- The line was long for our fabulous face painter.

The ones that weren’t completely covered in shaving cream opted for a cute look.
Some did both and they ended up with messy face paint! 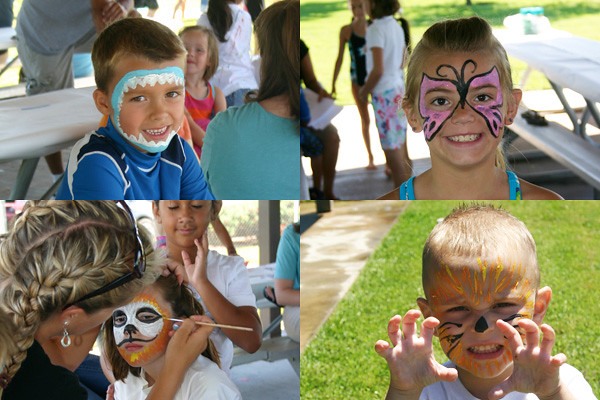 Coloring- Some kids are less adventurous and don’t love getting so messy.

So we had some simpler things out like coloring. We told them to make the tables messy.

Pudding Finger Painting- They used chocolate pudding to paint all over the (butcher paper covered) tables.

We put them in a cup so they wouldn’t be sharing germs as they licked their fingers along the way. 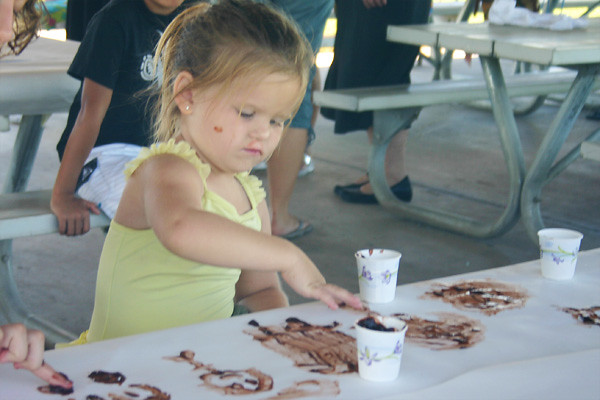 Kid Wash- Last year my friend commissioned her husband to build a “kid wash” out of pvc pipe.

It was hooked to a hose and they could walk through and get cleaned off.
This year we just set out a simple rotating sprinkler for them to run through.
This gives them the opportunity to clean up between messy activities, and before eating.

Messy Snack- Just try to think of the messiest things your kids eat.

Smores and Ice cream sandwiches came to my mind.
It was fun watching them eat these “smores sundaes” with their hands.
Last year we did little pudding parfaits with dirt (crushed oreos) on top. 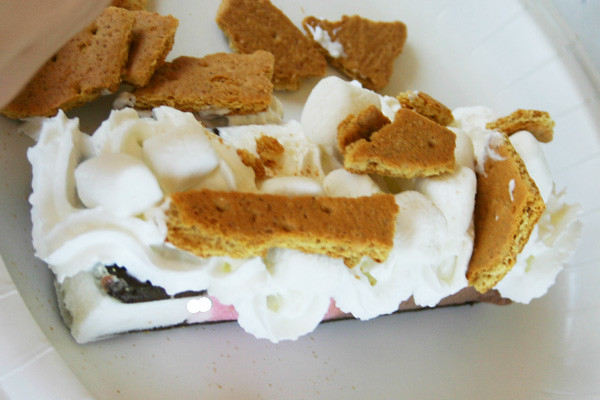 It was great to have a variety of really messy and kind-of messy activities, for all kinds of kids!
The invitations were splatter painted and messy! We were sure to let their parents know they
would be getting really messy. They wore a swimsuit or clothes they didn’t mind getting ruined.
Surprisingly enough, clean up was a breeze.
With a hose, a trash can and some towels, we left the church pavilion in decent shape.
I can’t take credit for the idea, but I’m so glad my friend let me do the Messy Party 2
and let me share the fabulous ideas.
Kids get messy whether we want them to or not, but they might not be used to us encouraging it.
(My kids for sure aren’t).
It only takes a minute for them to realize the mess really is allowed,
and soon they are experiencing messy bliss!
I’m sharing the messy love on Today’s Creative Blog and Blue Cricket Design.