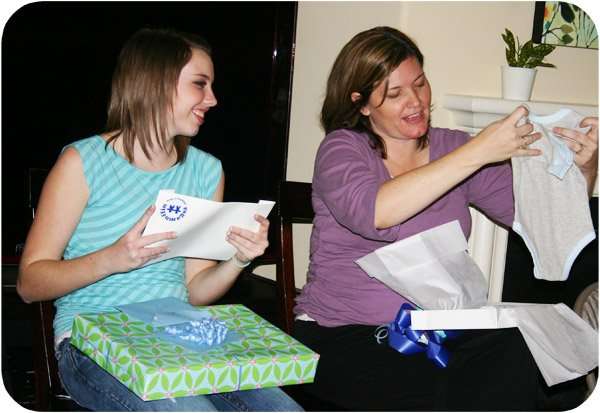 I forgot to tell you about the little surprise shower I gave my sister.

Of course she didn’t agree to any of it. She said, nada, nothing, no way, it’s my 6th!
However, I think every baby deserves a party, plus it had been 9 years since she had a baby boy.
I knew that the few people who came would bring a gift to her house anyway, why not give them a party? 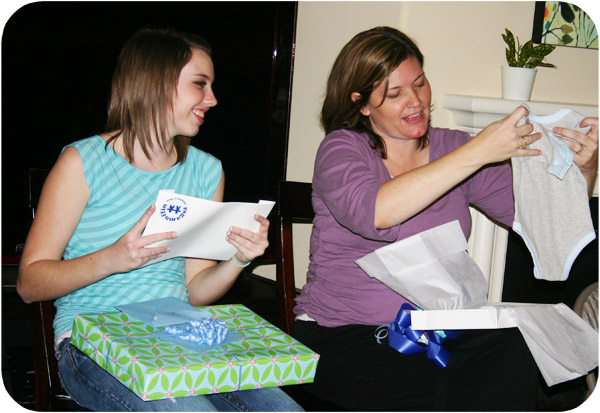 So the idea was low-key, just a small casual get together, so she wouldn’t be too mad at me.
But I couldn’t help having a small theme when inspiration struck!
Brady Bunch!
She was about to have 3 boys and 3 girls and her last name starts with B! Perfect.

I secretly got her kids over here to take their pictures and crated this simple, but funny invitation. 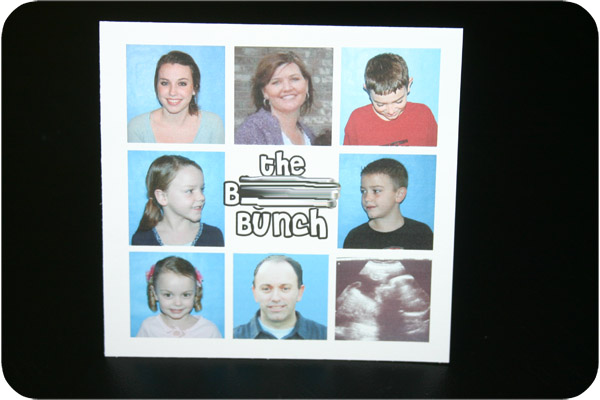 On the inside, I rewrote the theme-song. Can you please sing it as you read?
Here’s the story, of a lovely lady, who was busy with 5 kids of her own.
All of them were so much fun, like their mother. The youngest one in curls.
It’s the story, of a man named Brandon who was busy with great things of his own.
They were happy, living all together, but someone was missing in their home.
Till the one day when the lady had some good news. And we knew that it was much more than a hunch.
That a baby, would soon be joining the family. That’s the way they all became the (last name) Bunch!
(Thank-you for singing, it is only right).

I didn’t take hardly any pictures. I’m a bad blogger, but I was hosting a gig, okay!
I found some polyester fabric for a tablecloth and made a simple 70’s-ish table runner out of paisley fabric.
I even shopped Goodwill for old school serving pieces.
We had appetizers and sweets and throughout the serving table, were framed pictures of the original bunch. 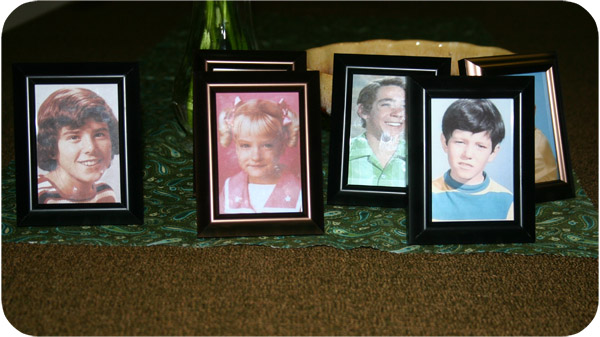 If there is anyone out there who has a sister who is about to complete her Brady Bunch, go for it.
Go 70’s/Brady style! Chances are, you won’t use this idea, but I decided to share anyway! 🙂

I’ll admit that this beaded room divider was a total “bee in my bonnet.”
The episode where Greg got to move his room upstairs really sticks out in my mind.
I always thought his room was so groovy with his beaded room divider.
I was set on having one of these for the shower. And since I was planning it pretty last-minute,
there was no time to order one online. I was set on making one.
By the way it took forever and I had to enlist the help of friends.
But thankfully, the shower was adorned with this beauty. 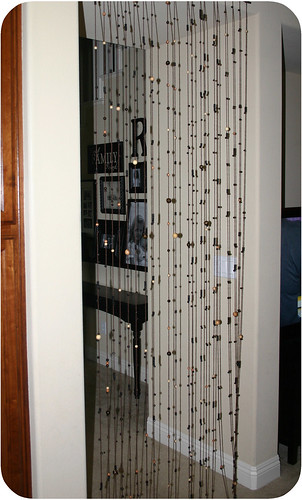 Lauri did the favor and made cute little cookies. “Peace out”… genius way to send off guests. 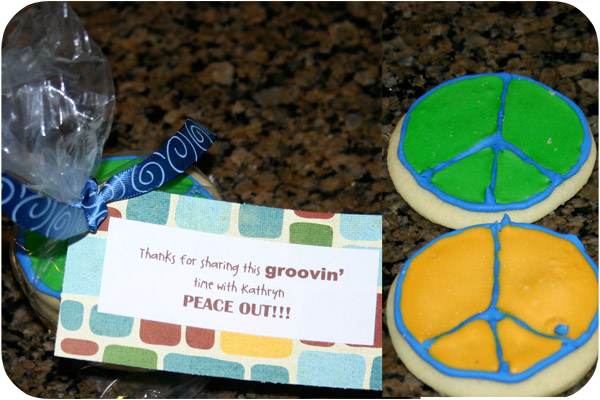 Katie did such a fun game. She did her research and came up with a quiz that
connected an episode of the Brady Bunch to misc. facts about her family.

Examples:
“At one time, Jan received a locket, only to lost it. Whith the help of the Brady’s, she found it again. What item most often gets lost around their home, forcing the family to band together and search for it?”

“The Brady family was featured in the newspaper for their teeter-totter record, Mike’s Father of the Year Award and Peter’s heroic actions. Which of Kathryn’s family members have been in the paper and what were they featured for?”

Seriously, all the questions were so funny. All of us 30-somethings laughed as we remembered the episode
and also learned something new about Kathryn at the same time.

And don’t worry, I had the theme music playing the second she walked in the door and we said, “surprise.”

Yes, I really humored myself with this silly little theme. I stopped myself at dressing up as Alice.
Sad, I know.