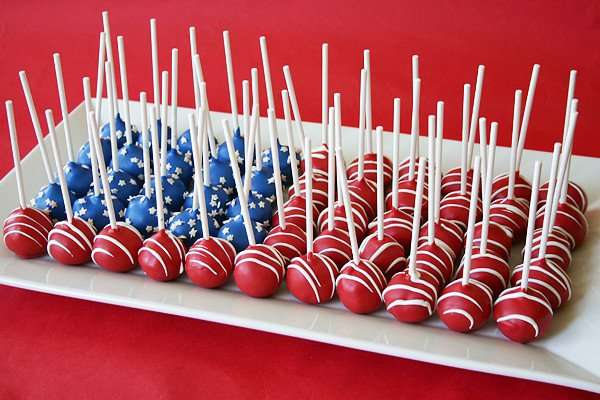 I brought these bad boys to the bbq yesterday. I was inspired by My Juice Cup and her Fourth of July cake pops- adorable.
I discovered this site via Pinterest, which still an obsession of mine and could possibly land me on the show “Intervention.”

And I almost needed an intervention when I was having a food coloring melt down in the midst of making these.

You see, I know you can’t just use regular old food coloring for tinting chocolate.  This stuff is great for icing and other such things.  But it is water-based, and any water in your melted chocolate will mess up the smooth consistency of the chocolate.  So this is a no go: So I bought the correct stuff to make my blue chocolate.  It is called “oil candy color” and the oil based stuff is perfect for your chocolate dying needs, right?  I even know that when making dark colors, you need to use a lot of coloring, so I did, and I got….lavendar.  Um…  red, white and lavendar?  AGHH! So I added more and I got a darker purple.  I was ready to march over to my cake store, which wasn’t open on the fourth and tell them that this bottle had been mislabeled and they needed to pay for the emotional damage it caused.  Just when I was ready to throw my flag dreams out the window, I tried putting in a little more and it magically turned blue!  There was a magical ratio/turning point somewhere along the lines of using half the large bottle.  It worked!  If I added a little more, it might have even been navy like the label says.  But I was content with the deep royal blue.

I tell you this so you can avoid the frustration in tinting your chocolate.  There is always the option of buying the chocolate the color you want.  But there is a limited color scheme available, and around holidays, you might find the color you need is out of stock. And I know you’ve seen enough 4th of July cookies, and it I know it’s over, but I had to tell you that I tried Martha’s idea.  Did you see her “fireworks” on the cover of LIVING this month?

They look a lot like the spider web cookies that Martha taught me how to do, years ago.

Yes, Martha and her cookie expert guest were the ones who started this cookie hobby of mine. I also tried to go out on a limb and do some other versions of fireworks cookies. And these fireworks are the grand finale for the patriotic treats for this year.
I hope you all had a safe and happy fourth!