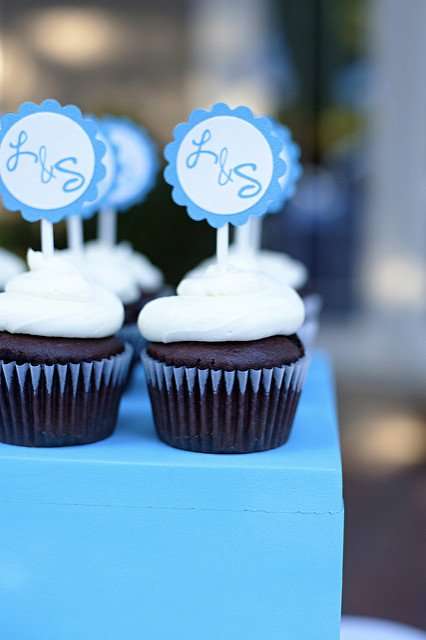 The bride and groom had a traditional wedding cake at the reception.
But here at the open house, we had some casual desserts, and some cupcakes. (photo by shandimariephotography)
The internet is such a huge resource for recipes, so I browsed around, bookmarking cupcake recipes.
I was on the hunt for a fabulous tasting chocolate and vanilla cupcakes.
I thought the only way to decide was to do side-by-side comparisons.
So I started with chocolate.
I will label them chocolate one, two and three.

They all tasted different, and looked very different too.
I frosted them with the same frosting, so as to give each recipe an even playing field. I had 3 whole batches on my hands, so I asked anyone I came in contact with for 2 days,
if they would taste them and give me their opinion.
The Result: The votes were split about 50/5o on cupcake one and two for first place. Third place was unanimous- cupcake #3. Cupcake 1 had a nice texture, pretty moist. Cupcake 2 (my vote) had a deeper chocolate flavor and was crazy moist. The drawback was that it crumbled and didn’t hold its shape when I unwrapped it.
No clear consensus led me to try recipe four and five.
Both were good, but neither knocked my socks off.
So I experimented with recipe #2, and changed some ingredients in an effort to make it hold together better. It worked! It was still very moist, very chocolaty and didn’t fall apart.
So that is the long story of how this cupcake came to be. Not bad looking either! (photo by shandimariephotography)
Then came the vanilla experiment.
I tried vanilla recipe one, two and three.
Unlike the chocolate, all three of these recipes looked similar.
Good thing I labeled them on the bottom. Again, I called on friends and neighbors for opinions.

The Result:
A clear winner! A clear second! A clear third! Every single person (about 10 people)
that tried them, ranked them the same.
First place was cupcake 1. Second was cupcake 3. Third was cupcake 2.
I was surprised at the winner. The other two recipes had hundreds of rave reviews.
But the little old recipe with few reviews was loved and adored by my people.
A few people couldn’t stop raving!
So I didn’t have to go any further. I stuck with recipe one.

(photo by shandimariephotography)
I experimented with my buttercream frosting recipe and came up with a winner.
I think I have a keeper there too! I’m sure I will get around to writing it down soon!
And… if you like it then you shoulda puta topper on it… Sing with me now! (photo by shandimariephotography)
Now as much as I loved the cake stands, I didn’t want to go overboard.
I decided to break it up by putting the cupcakes on boxes.
The handy husband built these out of wood scraps. They are open on the bottom, just 5 sided.
I filled holes, sanded and painted!

(photo by shandimariephotography)
I don’t want to store these boxes. Am I really going to use these again?
I’m sure Kathryn will store them for me. (wink)!
Long story for a few cupcakes… I know. But cupcakes are serious business.
Have you seen “Cupcake Wars?” It is our family favorite. We watch it together every week.
My girls loved this cupcake experiment and said, “It’s like we’re having our own cupcake war!”
If anyone wants to send me a link to another fab recipe. I’m open to more cupcake battles. 🙂