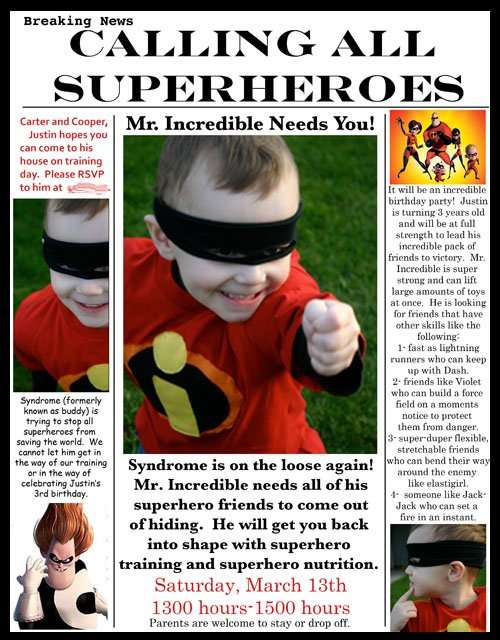 My son is obsessed with the Incredibles movie,
which made it really easy to decide on this as his party theme.
I wanted to share some of the things I did to TRY to make the party as Incredible as Justin is.
Lots of it can be adapted to other party themes.

I started by making this invitation in photoshop. 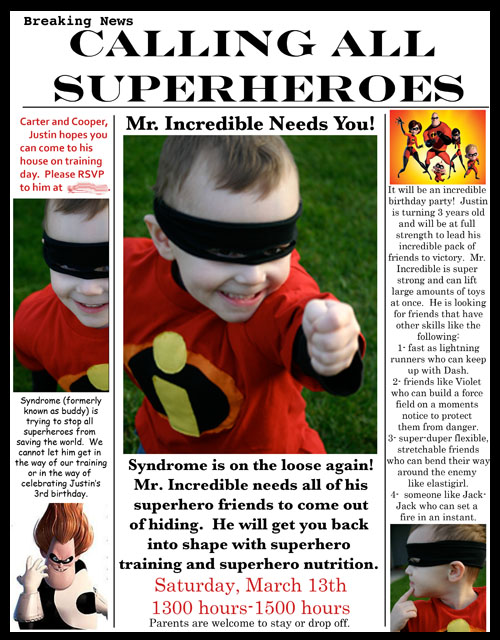 Then, we wrapped it up with a newspaper and hand-delivered most of them like this. 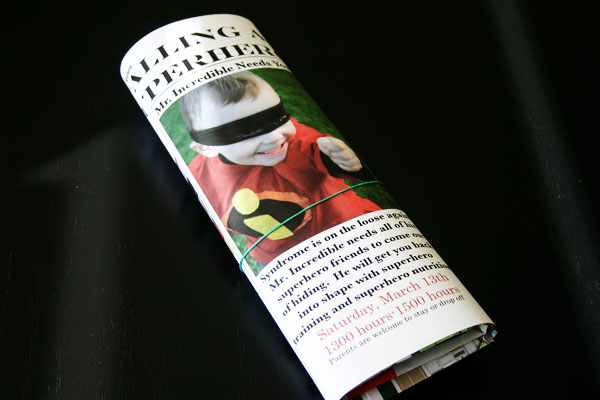 I didn’t want to buy a whole costume, so I made this little T-shirt for him.
I just cut out pieces, put interfacing on the back and sewed them on to a 5 dollar tee from Target.
Then I stuffed batting into his shirt for a few muscles.
He had no problem acting the part when I took pictures for the invitation. 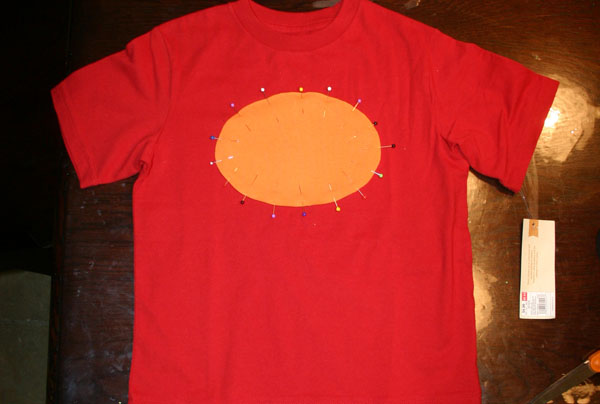 I did a few homemade decorations. These pinwheel things are so fun. 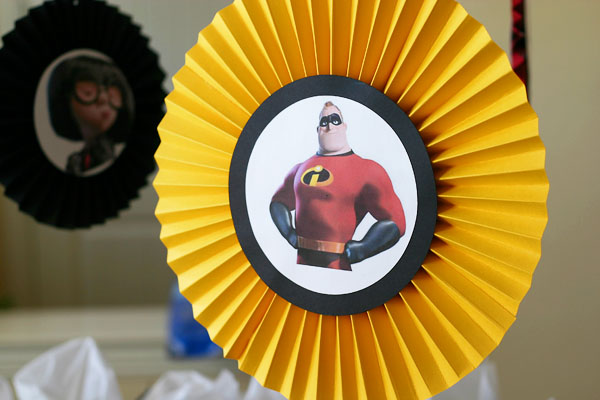 First, I used cardstock and hot-glue to make these. 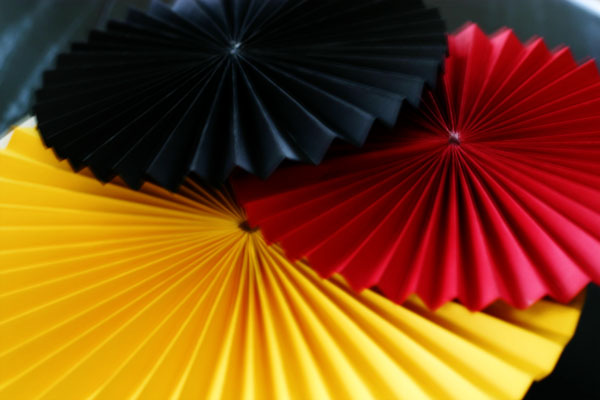 Then I printed images from the internet and put the characters in the center.
I hung them from the chandelier. 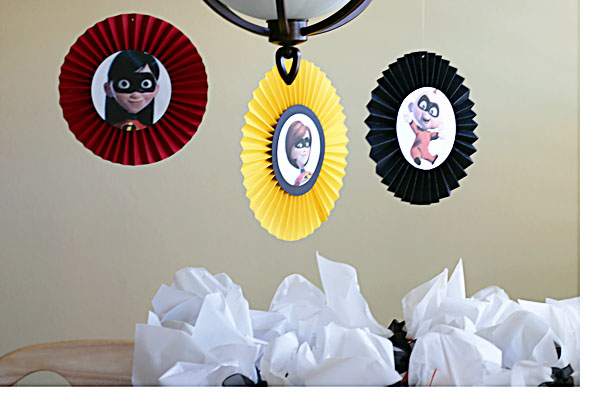 Another thing that was semi-homemade was the pinata. 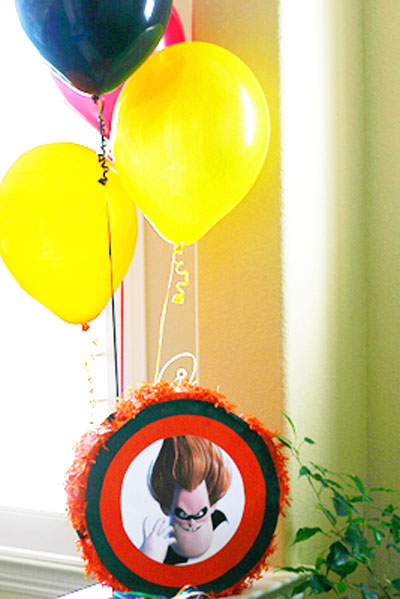 I wanted them to beat-up on a syndrome pinata, but couldn’t buy one, so I improvised.
I got this little cheapie from the grocery store and turned the happy sun into a nasty villain. 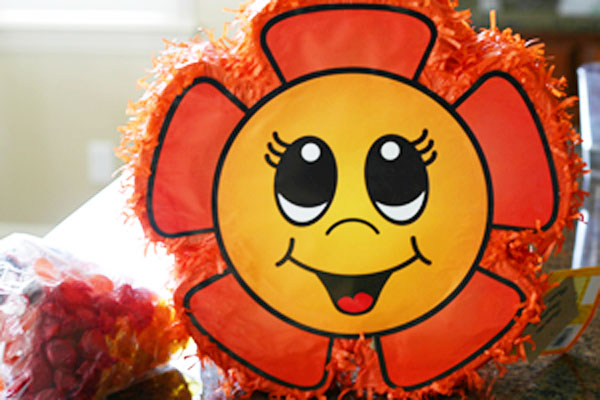 Again, I just printed off the internet and mounted them on paper. 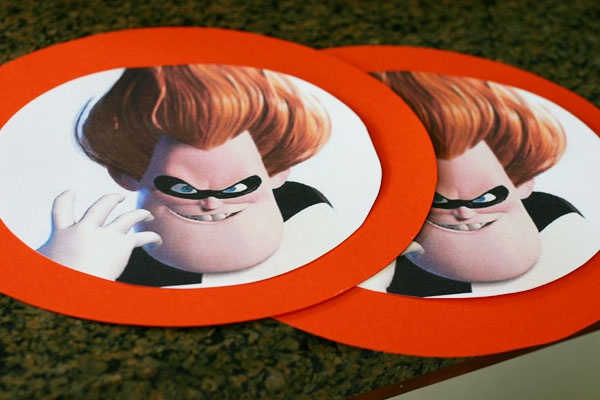 Here is the run-down of what we did:
Keep in mind, the kids are 3, so things were pretty simple.
Also keep in mind that the 70 degree weather I was wanting came two days too late.
There was such a chili wind we had to do all of the activities inside. 🙁

When they arrived we watched a little bit of the movie to refresh their memories. 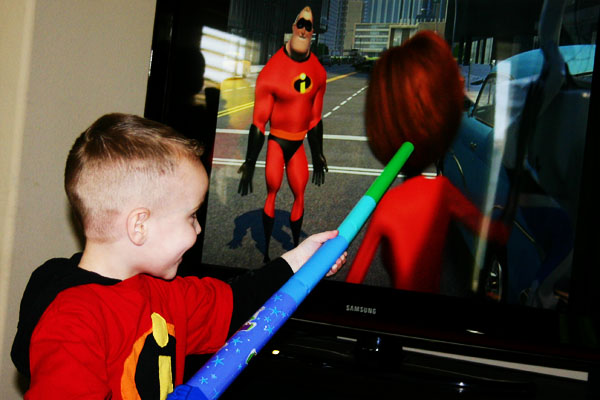 Then we had a healthy snack.
I told them that superheroes need to eat healthy food to be strong.
The one who needed this lecture the most was my own picky-eater!
Anyway, we had to fuel up before our training started. 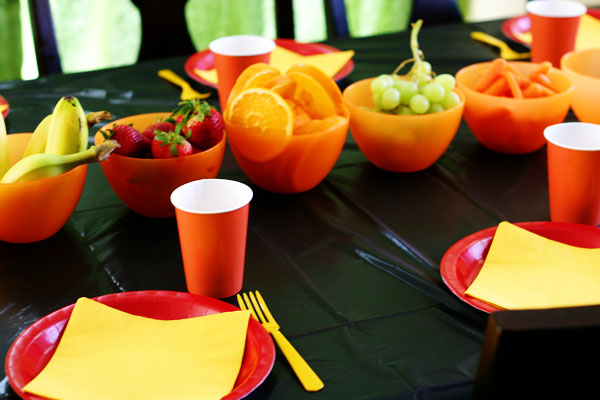 We started training with weights to be strong like Mr. Incredible.
We started with 2 pounders and then they tried harder weights- up to 10 pounds.
They were so cute as they tried. And these were some buffed 3 year olds. Then we practiced running fast like Dash.
They all ran a different, haphazard route around the cones,
but were so excited to get to the finishing point. 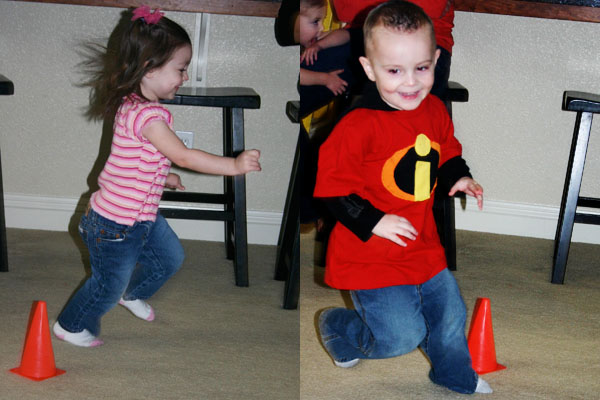 Then we skipped the obstacle course I planned because it couldn’t be done inside.
But now that we were in superhero shape, we were ready to practice fighting Syndrome.
We just needed superhero masks first. (I made cut these out of foam and tied on elastic. 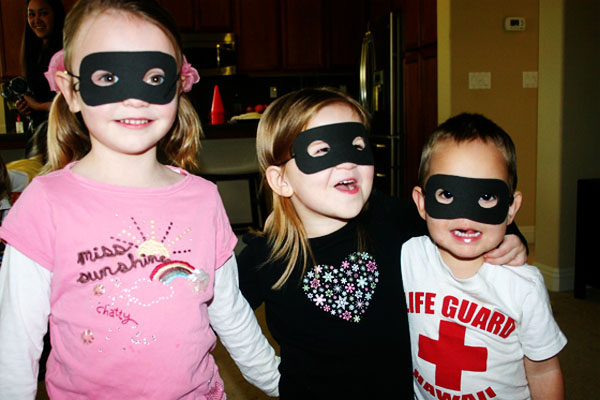 So we did the pinata… inside… totally weird…. I know.
Three year-olds swinging a bat in your home isn’t usually a thing I would suggest,
but the kids still loved it and all the decor and electronics survived.

And the final event… a battle with the “real” Syndrome.
Now that they had trained and practiced, they were prepared to battle the enemy.
Syndrome came out and there were 2 boys who immediately jumped on him to wrestle.
They got the idea perfectly after Justin started beating on his Dad. Others were just watching in amazement.
Two little girls were hiding behind my back getting more frightened by the minute.
So the battle was short-lived so as not to leave permanent emotional scars.
I have checked in with their parents and the girls both had positive things to say about the party.
The battle segment didn’t ruin their fun. 🙂 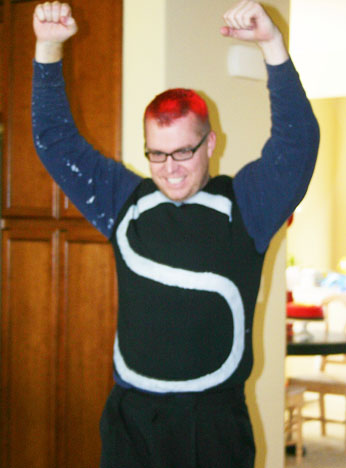 My husband isn’t known to do these kinds of things, and he really didn’t want to do the red hair.
But he did. And I was pleasantly surprised. And I told him he deserved “father of the year.”
Three year olds beating on you doesn’t hurt that bad, but he does have a broken arm (that he hasn’t casted yet)!
True dedication to the party, I say! 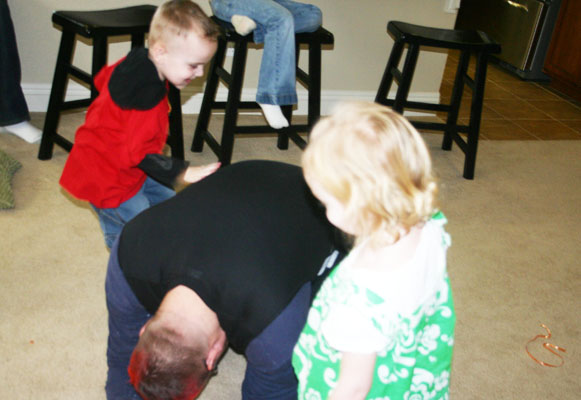 After all of this insanity we settled in to presents and cake and ice cream.
It cracked me up that so many of them were so excited about the gifts
they had gotten him, they began opening their own and yelling out what it was. So cute.
Good times.

Here is the cake. It was my first time with fondant, and it wasn’t near as hard as I thought it would be.
I guess all my practice with play-dough came in handy. 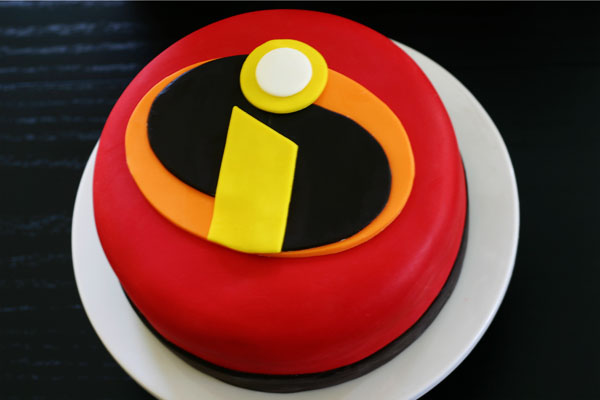 Justin was more excited about his star candles than the cake. One never knows how to please a 3 year old. 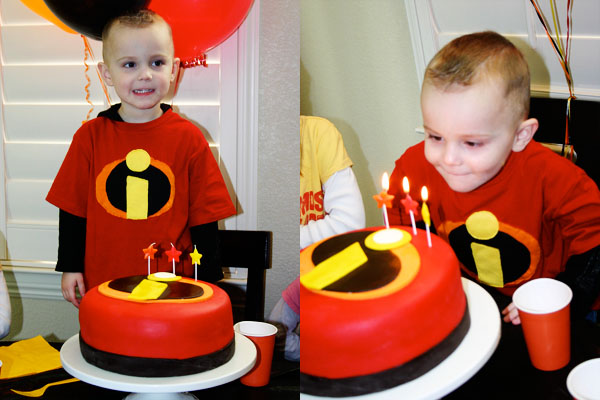 And last but not least… these are the goodie bags.
I was quite good at making the Incredibles symbol by the end of this.
Or so I thought until I realized I did them all the opposite way. Oh well. 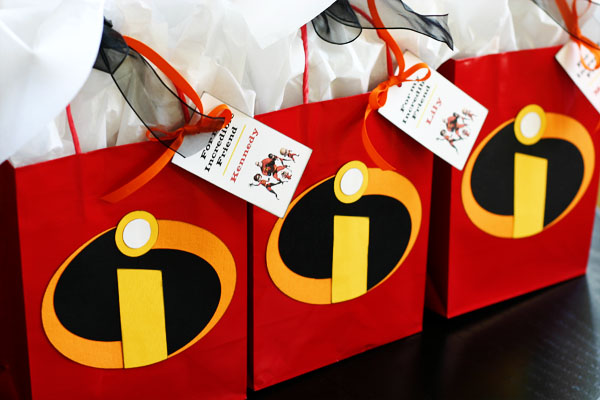 Inside I had a bunch of fun Incredibles stuff that I scored from the dollar spot at Target.
I bought all of this months ago. I loaded up with all they had, not really having any plans yet. 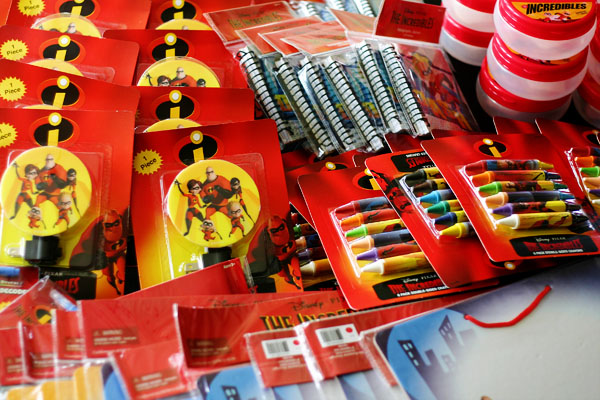 But, it all came together nicely, considering I did 95 % of this 2 days before.
I always have plans in my head, but don’t really pull them off until the last minute!
It was a great, small birthday party that was suited just for my incredible boy.

I’m linking up to:
A Soft Place to Land
My Frugal Family
Making the World Cuter
Blue Cricket Design
Somewhat Simple
A few of my favorite things
and Today’s Creative Blog.