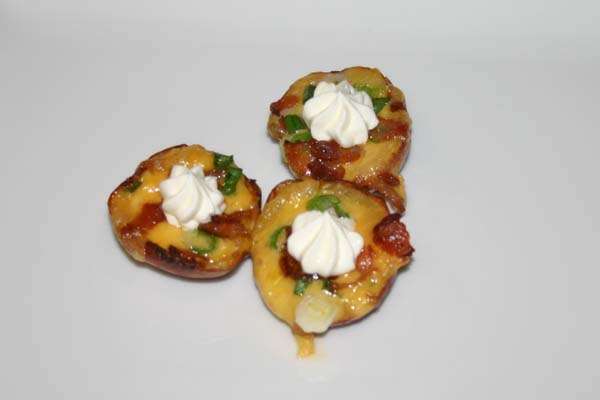 It’s time to gear up for the big game! (Feb 7th)
You know, the one where the commercials are way better than the featured event.
(So sorry to offend you sports fanatics.)

One thing I know will be appreciated, is if I smile pretty as I deliver some Baby Potato Skins. These babies are tasty.

Start with baby red potatoes. Cuz I’m in love with reds and I like the bite-sized ones.
Scrub those babies because they came from the dirt, you know.
Bake at 400 until they’re done. About 40 min. While they’re in the oven you can work on your other ingredients.
Cook the bacon. Crispy, but not over done because they will get broiled again.
Cut the green onions.
Grate the cheese.
And if you want to put your sour cream in this thing-a-ma-jig, then you can. After they’re done. Let them cool long enough for you to handle them.
Cut them in half, and scoop out the majority of the potato with a spoon. Leave about 1/4 inch on the skin.
Now pop them in the oven on broil for a couple minutes.
We’re just giving them a head start on crispiness. Now they’re ready to be loaded with flavor!
Sprinkle a little Garlic Salt on them.
Stuff with cheese, bacon and onion.
I made a royal mess here. Now you need to throw them in to broil for about 5 more minutes… Until they are crisped to your liking.
Don’t let any charcoal sneak onto your babies. Do watch with that oven light.

Now, do a dollop of Daisy. (Add some sour cream with a thing-a-ma-jig, or a spoon) Now they are ready to serve with a smile.
Just make sure not to interrupt any of the commercials.